Man United in ‘no rush’ over Camavinga deal despite ‘tentative talks’

Man United in ‘no rush’ over Camavinga deal despite ‘tentative talks’ 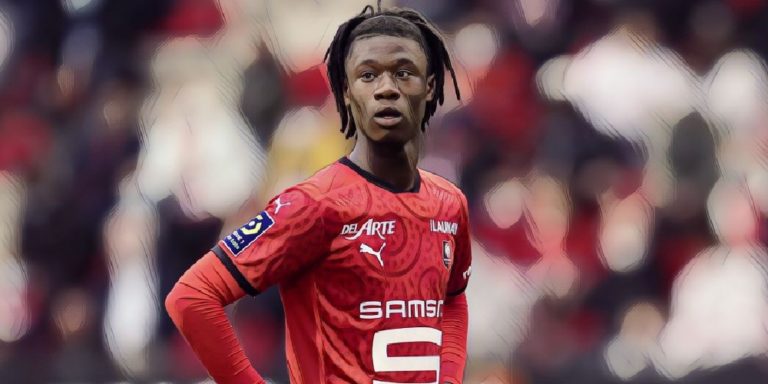 Manchester United are understood to be in ‘no rush’ to secure a deal for Eduardo Camavinga, despite holding ‘tentative talks’ with the highly-rated Rennes midfielder.

Camavinga has been linked with a host of Europe’s leading clubs after bursting onto the scene with the French side in recent seasons, becoming the youngest debutant and goalscorer in more than a century for the France national side.

The 18-year-old has entered the final year of his contract with Rennes and the Ligue 1 outfit are reportedly keen to secure a fee for the player, rather than risk losing the midfielder on a free transfer next summer.

Camavinga has been linked with both the Red Devils and Paris Saint-Germain, whilst a move to Spain is also believed to appeal to the youngster as he considers his next career move.

United are interested in signing Camavinga and according to The Athletic have held ‘tentative talks’ regarding a deal, though there is a need to raise further funds before another high-profile deal can be secured, with Jadon Sancho close to completing his £73m move from Borussia Dortmund.

Brandon Williams is one player who could depart and has been linked with Southampton, though the Saints are so far reluctant to pay the £2m loan fee that United are demanding for the academy graduate.

Jesse Lingard is another player whose future is yet to be resolved after spending the second-half of last season on loan at West Ham, the Hammers interested in a permanent deal but not prepared to meet the 28-year-old’s £30m asking price.

United may be forced into accepting a lower bid for the England international however, Lingard having entered the final year of his contract at Old Trafford.

The post Man United in ‘no rush’ over Camavinga deal despite ‘tentative talks’ first appeared on The Football Faithful.