Rodgers backs Vardy for another big season as Leicester bounce back

Rodgers backs Vardy for another big season as Leicester bounce back 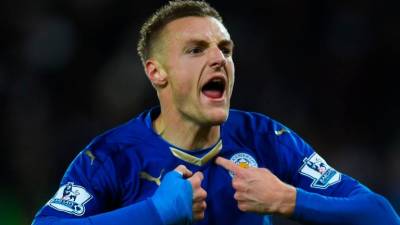 LONDON: Brendan Rodgers believes Jamie Vardy (pix) will again be among the Premier League’s most prolific strikers this season after he scored twice from the penalty spot in Leicester’s 3-0 win at West Brom on Sunday.

The Foxes bounced back from a disappointing end to last season to get their new Premier League campaign off to a winning start as Timothy Castagne enjoyed a dream debut with the opening goal before Vardy secured the points.

Leicester won just two of their last 10 games to miss out on a place in the Champions League on the last day of last season, but Vardy still claimed the golden boot for the league’s top scorer.

The former England international will turn 34 in January, but Rodgers believes his conditioning will ensure he has another big season.

“There are many top strikers at this level but any team would want someone like him in there,” Rodgers said.

“He’s super cool, clinical and has still got pace and running ability. In that situation to put us two up he showed great composure. It’s a great start for him to score two goals and very good for the team.

“With top quality players, it doesn’t matter what they’ve done, doesn’t matter how much they earn, they want to be the best they can be. He trains and works intensely and he is a natural goalscorer – he is still quick, I suspect he will have another great season.”

Rodgers had voiced his frustration at a lack of funds to help his side’s chances of success in four competitions this season as they return to European football in the Europa League from October.

But the one new signing they have added made a big impact as Castagne’s towering header from Dennis Praet’s cross opened the floodgates 11 minutes into the second half.

“He’s been brilliant. He’s only trained a couple of days with us and you’ve seen with his performance, he’s got loads of qualities and to be coming in at the back post like that,” said Vardy.

“It’s massive for us, especially with how we finished last season. We’ve not had long to come back in this season, so to start with three points, we’re delighted.”

The goal rocked Albion as Slaven Bilic’s men got a taster of the test that faces them this season on their return to the Premier League.

“I’m very disappointed with the result but the biggest disappointment was our reaction after the goal,” said Bilic. “Our mentality was not the same.”

Vardy killed the game off as a contest with his first penalty after he was hauled back by Kyle Bartley in the box.

And 10 minutes later he was deadly from the spot once more when Dara O’Shea felled James Justin. – AFP