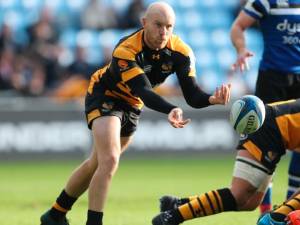 The 33-year-old, capped once by England, has joined ahead of Saracens’ Premiership return against Bristol on Friday.

Saracens were promoted at the end of last season after the former Premiership and European champions were relegated from English club rugby union’s top flight the previous term for breaches of financial regulations.

North London club Saracens said Simpson would provide cover with Ivan Van Zyl currently suspended – he was sent off in a pre-season friendly – and Van Zyl’s fellow scrum-half Ruben De Haas currently away on international duty with the United States. Saracens also have Wales international Aled Davies on the books.

“We are obviously delighted to secure the services of such a high quality, experienced player as Joe to increase our options at scrum-half in the weeks ahead,” said Saracens rugby director Mark McCall in a statement.

“We are grateful to Gloucester for enabling this loan move to take place.”

Simpson, who made his name at Wasps, where he made 230 appearances, added: “I’m hugely excited about being given the opportunity to join Saracens on loan.

“They have set the bar, performance wise, for all of the teams in the Premiership over the last decade and I can’t wait to meet everyone and contribute to the club.” – AFP