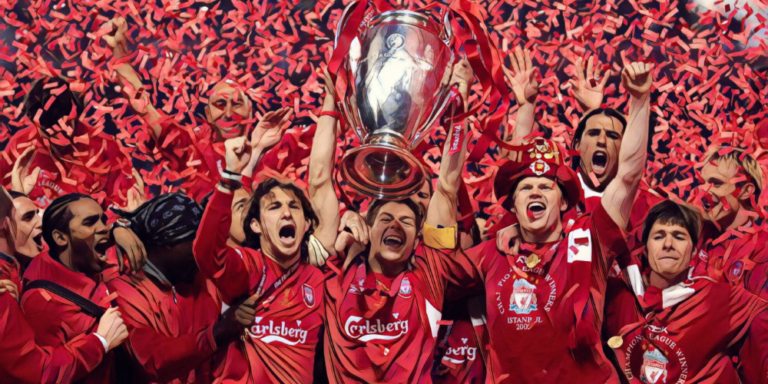 Liverpool meet AC Milan in the Champions League this week, the Italian giants having been the opponent for one of the club’s most iconic fixtures.

The two teams met in the 2005 Champions League final, with Liverpool entering the contest as huge underdogs on their first appearance in a European Cup showpiece for two decades.

The pre-match predictions appeared to be running true as Milan raced into a three-goal half-time lead, but Rafael Benitez’s side fought back in one of the most dramatic major finals in football history.

After clawing back a three-goal deficit to force extra-time and penalties, the Reds improbably triumphed via a shoot-out to be crowned as champions of Europe for a fifth time in Istanbul.

Here is the Liverpool XI from their historic Champions League final comeback against AC Milan.

Jerzy Dudek wrote his name into Liverpool folklore following his Champions League final heroics, the Polish goalkeeper – not always convincing throughout six seasons on Merseyside – outstanding in the closing stages at the The Atatürk Stadium.

Dudek produced an extraordinary double save to deny Andriy Shevchenko in extra-time, before a save from the same player during the shoot-out sealed Liverpool’s coronation as European champions.

But this double save in the *117th minute* to deny Andriy Shevchenko was absolutely crucial!

His invoking of former Liverpool goalkeeper Bruce Grobbelaar’s ‘wobbly knee’ routine for the shoot-out only enhanced his standing amongst the Reds’ support, with Andrea Pirlo also denied from the spot on a pulsating evening in Turkey.

Finnan was a model of consistency across six seasons as a Liverpool player, the former Republic of Ireland a dependable performer for Rafael Benitez’s side.

The right-back was solid defensively and often a threat when venturing forward, but his final ended prematurely after being substituted at half-time through injury, having been on the receiving end of a one-sided Milan performance.

One of two Liverpool natives in the side’s Champions League-winning contingent, Carragher was part of a defence ruthlessly cut apart across the opening 45 minutes before regrouping and battling after the interval.

Carragher made a series of crucial interventions as Liverpool rode their luck in the second half and extra-time, coping with intense cramp as he sought to keep Milan at bay.

The centre-back – whose 737 appearances for Liverpool rank him second on the club’s all-time list – was the voice who urged Dudek’s theatrics ahead of the shoot-out.

Like Carragher improved as the game progressed, Hyypia initially struggled to live with Milan’s attacking options as the movement of Andriy Shevchenko and Hernan Crespo troubled the towering Finland international.

Hyypia proved one of Liverpool’s best pieces of business of the Premier League era, arriving as a relative unknown from Willem II before spending a decade on Merseyside.

The centre-back won six major honours and captained the Reds before the responsibility was handed to an emerging Steven Gerrard, making 464 appearances across all competitions for the club.

Djimi Traore’s time with Liverpool can be defined by two moments of vastly contrasting fortunes, with his role in the Reds’ triumph in Istanbul and a comical own goal at Burnley the abiding memories of his time on Merseyside.

The full-back was found out of his depth for much of the final clash with Milan, but made a crucial goal-line clearance to deny Shevchenko and ensure the scores remained level following Liverpool’s second-half fightback.

Alonso was in his maiden season with Liverpool following his arrival from Real Sociedad the previous summer, with the midfielder having shown glimpses of the quality that would see the Spaniard emerge as one of the best of his generation.

After failing to get to grips with Milan’s midfield before the break, he improved after half-time with some solid passing and stepped up to convert Liverpool’s equaliser – turning home the rebound after seeing Dida save his initial penalty.

Remarkably, Alonso’s spot-kick in Istanbul was the first he had ever taken in professional football.

Gerrard failed to make an impact during a forgettable first-half performance, before coming to the fore in the second half to cement his Liverpool legend.

The captain’s brilliant header raised initial hopes of a fight back, before a surging run into the box saw Gennaro Gattuso haul down the midfielder and award Liverpool the penalty from which they equalised.

Gerrard’s drive and will-to-win helped to turn the tide, with the midfielder’s defensive work in the second half crucial to the Reds, covering gaps at right-back following Finnan’s half-time substitution through injury.

Three-nil down at half-time in the final in Istanbul.
The rest is history..

Gerrard established himself as arguably Liverpool’s greatest player after coming through the academy ranks, winning seven major honours and captaining the club for over a decade.

Instrumental in Liverpool’s passage to the final, Garcia failed to have the desired impact during the showpiece against Milan.

His performance on route ensured his place as a firm fans’ favourite in his maiden season however, with Garcia scoring five goals during the Champions League’s knockout stages, including a stunning effort from distance against Juventus in the last eight and that ‘ghost goal’ semi-final winner against Chelsea.

The Spaniard made 122 appearances across three seasons with Liverpool, scoring 30 goals.

The Norwegian rampaged forward down the Liverpool left for seven seasons, always offering a forward threat whether utilised at left-back or further down the flank.

Riise’s penchant for a thunderbastard made him a popular figure on the Anfield terraces, though he initially struggled up against Cafu in the final meeting against Milan.

He did, however, provide the cross for Steven Gerrard’s goal, though was the only Liverpool player to miss in the penalty shoot-out after seeing his effort saved by Dida.

Fortunately for Riise his error didn’t prove costly, with the Reds’ Champions League success the highlight of a Liverpool career that delivered 348 appearances.

Kewell’s inclusion in the starting side came as a surprise, but a dream appearance in club football’s biggest fixture ended in heartbreak for the Australian who limped off after just 23 minutes – his substitution greeted with jeers from sections of his own support.

It was a microcosm of Kewell’s career with Liverpool as a whole, the flashes of the brilliance he so often demonstrated at Leeds mixed frequently with injury problems during a difficult period.

He made just 93 league appearances across five seasons for the Reds, scoring 12 goals.

Michael Owen’s departure to Real Madrid the previous season provided Milan Baros with a chance to lead the line for Liverpool in 2004/05, with the Czech Republic international having finished as the leading scorer at Euro 2004.

Baros scored two goals during the Reds’ passage to the final but was afforded little change from Jaap Stam and Alessandro Nesta for much of the contest.

His clever flick into the path of Gerrard resulted in the penalty and Liverpool’s crucial third however, in what was one of Baros’ final appearances for the club after signing for Aston Villa in August 2005.

Smicer was introduced as an early substitute in place of Kewell in what was his final appearance for Liverpool, with the Czech midfielder scoring the Reds’ second goal with a low finish beyond Dida.

It was Smicer’s only goal of a season in which he made just five starts across all competitions, the experienced star choosing the ideal moment to make his mark in Istanbul.

He also cooly converted his penalty in the resulting shoot-out, a perfect finale for a player whose career with the club had largely been mixed.

Arguably the introduction that changed the course of the final, Didi Hamann was a surprise omission from the starting side as Benitez opted for an uncharacteristically attacking line-up in Istanbul.

The German’s absence saw Kaka run riot behind an open midfield in the first half, but the assured presence of Hamann helped Liverpool reduce Milan’s marauding runs at the Reds’ back four.

Hamann played the latter stages of the final with a broken foot, even stepping up to slam home Liverpool’s first penalty in the shoot-out.

The midfielder proved a stellar servant to the club across seven seasons on Merseyside, having arrived from Newcastle in 1999.

Djibril Cisse’s debut season at Liverpool was marred following a horrific broken tibia and fibula injury, but he made a shock return to action ahead of schedule in the closing stages of the season.

The forward came on as a substitute for Milan Baros with five minutes of normal time remaining and whilst he failed to manufacture any clear sights of goal, stepped forward to convert a penalty as Liverpool were crowned European champions.

The post Remembering the Liverpool XI from their classic comeback against AC Milan in Istanbul first appeared on The Football Faithful.