Sky’s the limit as Mbappe eyes place in history

Sky’s the limit as Mbappe eyes place in history 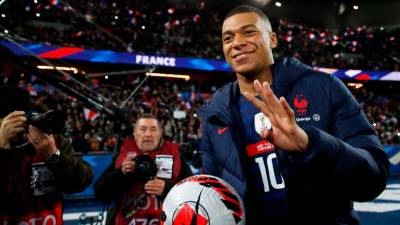 PARIS: Kylian Mbappe continued his meteoric rise on Saturday with another jaw-dropping performance as France qualified for next year’s World Cup with an 8-0 demolition of Kazakhstan. The Paris St Germain striker became the first player to score four goals for France in a single game since Just Fontaine against Sweden at the 1958 World Cup.

Five weeks before his 23rd birthday, Mbappe has scored 23 international goals from 52 caps — bettering the marks of Lionel Messi and Cristiano Ronaldo at the same age.

“It was a great night for him in terms of efficiency but he’s had so many before,” coach Didier Deschamps said.

“His stats are already so impressive. He’s slowly starting to get good with headers as well. He is making the metres go crazy.”

Mbappe’s display was all the more impressive as he also set up Karim Benzema for the fourth goal, earning a perfect mark of 10 from French sports daily L’Equipe.

“Maybe one day a kid who’s been watching me on TV will beat my records. I’ve always had this determination to leave a mark and I want to continue to do so.”

“He can do anything,” said Deschamps, who also praised the forward’s approach to the game.

“I also want to salute his mindset. He could have scored a fifth goal but he let Antoine (Griezmann) take (and score) the penalty.”

On a perfect night for the world champions, who have not lost a game except on penalties in their last 26, it was also Mbappe’s association with Benzema that caught the eye, with Griezmann proving the ideal complement for the explosive duo.

“Since Benzema’s comeback (before Euro 2020), it has been getting better and better. We especially saw the understanding between Mbappe and Benzema,” former France international Maxime Bossis told L’Equipe.

“Griezmann may have seemed less decisive in the game but he scored. When he plays a little bit behind, it offers a better balance with the two who moved a lot in front, with interesting cross runs.”

With Benzema, France were still eliminated in the last 16 at Euro 2020 by Switzerland, but in retrospect, it seems that Deschamps’s mistake was to recall the Real Madrid forward too late.

Les Bleus have one more qualifying game in Group D, away to Finland on Tuesday. – Reuters