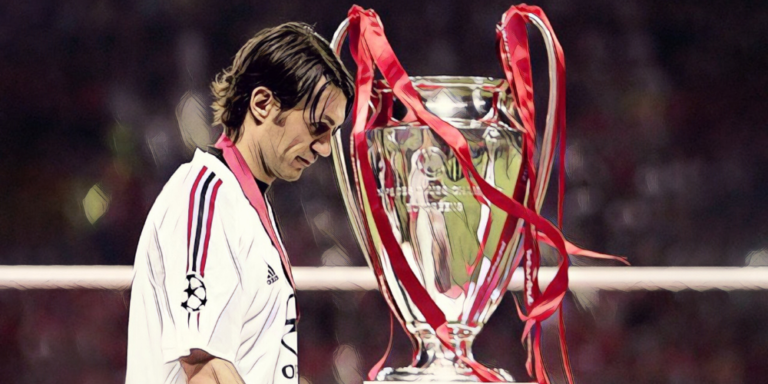 AC Milan’s collapse in the 2005 Champions League final ranks as one of the tournament’s greatest shocks, the Italians improbably imploding to squander a three-goal lead to Liverpool.

Milan entered the final in Istanbul as heavy favourites having lifted the Champions League two seasons earlier, but stepped off the gas against an unfancied Liverpool in the most entertaining final in the competition’s history.

The Rossoneri face Liverpool in this season’s group stage this evening in a fixture that will no doubt evoke memories of that famous night in Turkey.

Here is the AC Milan side that collapsed against Liverpool in Istanbul.

The hero of Milan’s shoot-out success against Juventus in the 2003 final, this was a performance in which the Brazil international fell below his usual high standards.

Dida failed to provide an assured presence as Liverpool staged a second-half fightback and will have been disappointed not to have saved Vladimir Smicer’s low effort, the second goal truly raising belief amongst the Merseysiders.

The Brazilian twice won the Champions League during eight seasons as Milan’s number one, including forming part of the side that avenged their defeat to Liverpool in 2007.

Regarded amongst the finest full-backs of all time, Cafu was in his second season at Milan after signing from Roma and was at his buccaneering best during the first half to pen Liverpool back.

He struggled to continue his forward forays as the momentum swung after the interval, a shell-shocked Milan overwhelmed during a six-minute spell in which the Reds scored thrice.

Cafu is another who formed part of Milan’s successful side two seasons later, adding the Champions League to a résumé that includes two World Cup winners’ medals and a record 142 caps for Brazil.

Part of a lineage of great Italian defenders, Nesta became one of the most complete centre-backs in world football after signing for Milan from boyhood club Lazio.

He spent a decade at the San Siro and won two league titles and two Champions League trophies, though could perhaps have done better to prevent Milan Baros’ flicked pass in the build-up to Liverpool’s third goal.

A rare blemish on a career in which Nesta made defending at the highest level often appear child’s play.

Complimenting the elegance of Nesta was the domineering Jaap Stam, the Dutchman a familiar face for Premier League fans following a trophy-laden spell at Manchester United.

Stam was approaching the latter stages of his career during the 2005 final in Istanbul, but still posed a formidable presence and gave little change to either Milan Baros or Djibril Cisse.

He spent two seasons with Milan after arriving from Lazio, before returning to the Netherlands to finish his career with Ajax.

Arguably the most iconic figure in Milan’s long and illustrious history, the 2005 final was the seventh time that Paulo Maldini had taken to the field in club football’s biggest fixture.

The clash in Istanbul started in dream fashion for Maldini as he scored the fastest goal in Champions League final history after only 50 seconds, a goal which also made him the oldest final goalscorer aged 36 years and 333 days.

The veteran – who made a club-record 902 appearances across a 24-year career with Milan – was amongst his side’s best performers, though was powerless to prevent the final slipping away from the Rossoneri.

He captained the side to success two seasons later however, winning a fifth European Cup with an 18-year gap between his first and fifth successes in the competition.

The conductor of Milan’s midfield helped run the show during the opening 45 minutes, breaking up play from his role at the base of the engine room and launching attacks with his passing through lines.

Pirlo’s performance – like most of his teammates – dropped markedly after the break as Liverpool gained a foothold in the game, whilst his penalty in the shoot-out was a poor effort easily saved by Jerzy Dudek.

The final proved far from his finest showing in a career of huge highs, with Milan’s decision to allow the midfielder to leave on a free transfer for Juventus in 2011 one that came back to haunt the club.

Pirlo inspired Juventus to four consecutive titles during his time in Turin, whilst he won Serie A’s Footballer of the Year in three successive seasons after arriving from Milan.

Gattuso’s final showing was typical Gattuso, a tiresome and tenacious display in the engine room with the combative star often proving a difficult opponent.

It was Gattuso who clumsily conceded the penalty for Liverpool’s third as the Reds drew level however, hauling down Steven Gerrard inside the area with the midfielder perhaps fortunate to escape without punishment.

Gattuso – alongside Pirlo – formed part of the Italy midfield as the Azzurri won the World Cup the following summer, whilst he returned to Milan for a brief spell as manager after a playing career at the San Siro that delivered 468 appearances.

Clarence Seedorf’s role in Milan’s success on this stage two seasons earlier saw the midfielder become the first – and since only – player to win the Champions League with three different clubs.

The Netherlands international was unable to help Milan reassert midfield dominance in the second half and was substituted towards the end of normal time and replaced by Serginho.

Seedorf signed for Milan in a bizarre swap-deal with rivals Inter, the former certainly winning the trade as the Dutchman established himself as a club great across a decade at the San Siro.

Like Gattuso, he was handed an opportunity as Milan manager post-retirement in a short and unsuccessful spell.

Sensational during the first 45 minutes in Istanbul, Kaka must have been left wondering just how he had not claimed a Champions League winners’ medal at The Atatürk Stadium.

The Brazilian was in devastating mood as he evaded the attentions of the Liverpool midfield to wreak havoc, with Kaka the architect of the second and third Milan goals in a rampant first-half performance.

His assist for the third was sublime as he span away from Steven Gerrard before dissecting the Liverpool defence with a weighted pass in behind, but his evening ended in dismal fashion as Carlo Ancelotti’s side collapsed.

Having failed to settle during a debut season at Chelsea, Crespo was loaned to Milan for the 2004/05 season and soon formed part of a formidable forward contingent.

Crespo scored 17 goals in all competitions during the campaign, including a first-half brace as the Italian side raced into a 3-0 half-time lead in Istanbul.

The Argentina international was a menacing presence throughout and took his second goal in brilliant fashion, a dinked finish over Jerzy Dudek after latching onto Kaka’s through ball.

Despite his strong performances he returned to Chelsea the following season, scoring 10 league goals as the west Londoners won the Premier League in 2005/06.

The reigning Ballon d’Or winner had an evening he’d rather forget, first seeing a goal narrowly chalked off for offside before finding himself at the centre of an unfavourable narrative for Milan.

Shevchenko missed a guilt-edged chance to snatch the final late in extra-time as Dudek produced an improbable double save from point-blank range to deny the Ukrainian, before his tame penalty was saved in the shoot-out to crown Liverpool champions of Europe.

But this double save in the *117th minute* to deny Andriy Shevchenko was absolutely crucial!

Shevchenko had scored the decisive penalty as Milan beat Juventus two seasons earlier, during a career with the club that saw him score 175 goals in all competitions – a figure second to only Gunnar Nordahl.

Introduced for Crespo with five minutes of normal time remaining, the Denmark international missed a glorious chance to win the final for Milan after Djimi Traore misjudged Serginho’s cross in extra-time.

Tomasson converted his kick in the shoot-out with Milan already 2-0 down on penalties, in what proved his final contribution for the club after leaving to join Stuttgart in 2005.

Another late introduction as Milan sought greater energy, the presence of Serginho down the left-hand side forced Steven Gerrard into an unfamiliar right-back role to combat the Brazilian’s threat.

He provided a number of dangerous deliveries from wide, but was guilty of missing Milan’s first penalty in the shoot-out with a wild penalty struck high over the crossbar.

Rui Costa arrived into the fray in extra-time but was given little time to made an impact in the added period, the veteran Portugal midfielder coming close from a corner but unable to find a breakthrough for Milan late on.

The playmaker had been a key figure for the Italians after arriving from Fiorentina, but the emergence of Kaka in an advanced role diminished his role under Ancelotti.

Read Also – Iconic Duos: The prototypes of the modern full back, Cafu and Roberto Carlos

The post Remembering the iconic AC Milan XI that collapsed against Liverpool in the 2005 UCL final first appeared on The Football Faithful.