THROWBACK TO THAT MAGICAL NIGHT

THROWBACK TO THAT MAGICAL NIGHT

It was a night that made us believe miracles do happen. It was a night that made us believe hope is the best of things again. A night that defied logic and all sense as the impossible occurred on the field. Of course, it is the Miracle of Istanbul that we’re talking about. The Champions League final of 2005 between Liverpool and AC Milan is dearly referred to as the Miracle of Istanbul. The comeback by Liverpool from the dead is considered the best ever comeback in the history of any sport.

AC Milan took a three-nil lead on the night within the first half. It looked like the game was over by the time the half-time whistle was blown. For a Milan side stacked with legends everywhere, defending a three-goal lead wasn’t a tough job. But Liverpool had other plans. Their inspirational leader Steven Gerrard headed in early in the second half. In a rapid blitz, they scored twice to equalize and take the game into the extra time. Thanks to Jerzy Dudek’s heroics in the penalty shootout, Liverpool lifted their fifth Champions League crown after a thrilling night.

Champions League nights at Anfield are BACK

Since then, it is a much-revered fixture. Liverpool and Milan had other memorable fixtures too but this Istanbul clash holds a special place. The two sides meet again in this seasons Champions League. Liverpool have been on the up for five years under Jurgen Klopp. Milan have also enjoyed a renaissance in the last two years as they make a return to Europe’s premium club competition.

As the giants lock horns in the Group-B fixture, we take you down memory lane to relive the Champions League final clash between Liverpool and Milan.

Milan had one of the strongest squads in the world. Maybe it was one of the best ever teams assembled in the sport. Right from the back, they had world-beaters. Paolo Maldini, Allesandro Nesta, Andrea Pirlo, Kaka, Hernan Crespo and Andriy Shevchenko were only a few of the star names.

They finished as runners up to Juventus in a season where the league title wasn’t awarded to anyone due to a fixing scandal. Milan made light work of Manchester United and local rivals Inter in the knockout fixture before labouring past PSV in the semis. They travelled to Ataturk Olympic Stadium as heavy favourites. It was the first time a Champions League final was being held in Turkey.

AC Milan visit Anfield for the first time in their history.

Two giants of the game, they’ve only ever faced each other in European Cup finals.

2021 marks 16 years since that famous night at the Atatürk Olympic Stadium.@sammatterface tells the story of the Miracle of Istanbul. pic.twitter.com/3vWajq2NqT

Liverpool on the other hand were struggling in the league. They failed to adapt to the changing game and didn’t win the league in 15 years. Rafael Benitez was handed a rebuild and Liverpool finished fifth in the league that season. Liverpool thumped Bayer Leverkusen and scraped past Juventus and Chelsea to make it to the finals. Liverpool mustered all their strength to face Milan in the finals.

The first half started according to the script as the Italian club ran riot. They scored within the first minute of the game as captain Maldini volleyed in a Pirlo freekick. This unsettled Liverpool but the Merseysiders did well to keep attacking frequently. An entertaining half was nearing its end when Milan carved Liverpool’s defence for fun.

Hernan Crespo finished a sweeping counter-attack started by Kaka at the 40th minute. Crespo was the culprit again as he delightfully chipped a Kaka pass past Dudek. Milan took a seemingly unassailable three-goal lead into the break. Liverpool were dejected and needed a miracle to get back into the game.

Liverpool weren’t that awful to go down by three goals. They had their moments like John Arne Risse’s close volley, Sami Hyppia’s header etc. Steven Gerrard, Liverpool’s captain and their best player was the one creating chances. The Englishman had a name of performing well at big games. He and Benitez had to lift the spirits of the team to put on a fight or even go out there and match Milan’score. A six-minute spell in the second half was all it took to create history

They made a positive start to the second half and Gerrard took matters into his own hands or rather head when he bombed forward into the box in the 54th minute. Gerrard connected to a Riise cross from the left and looped his header past a hapless Dida in goal. The captain knew his task wasn’t finished and cheered his lads for more. After Gerrard’s goal, Liverpool played like a possessed team and scored twice in six minutes as AC Milan were left shell shocked. 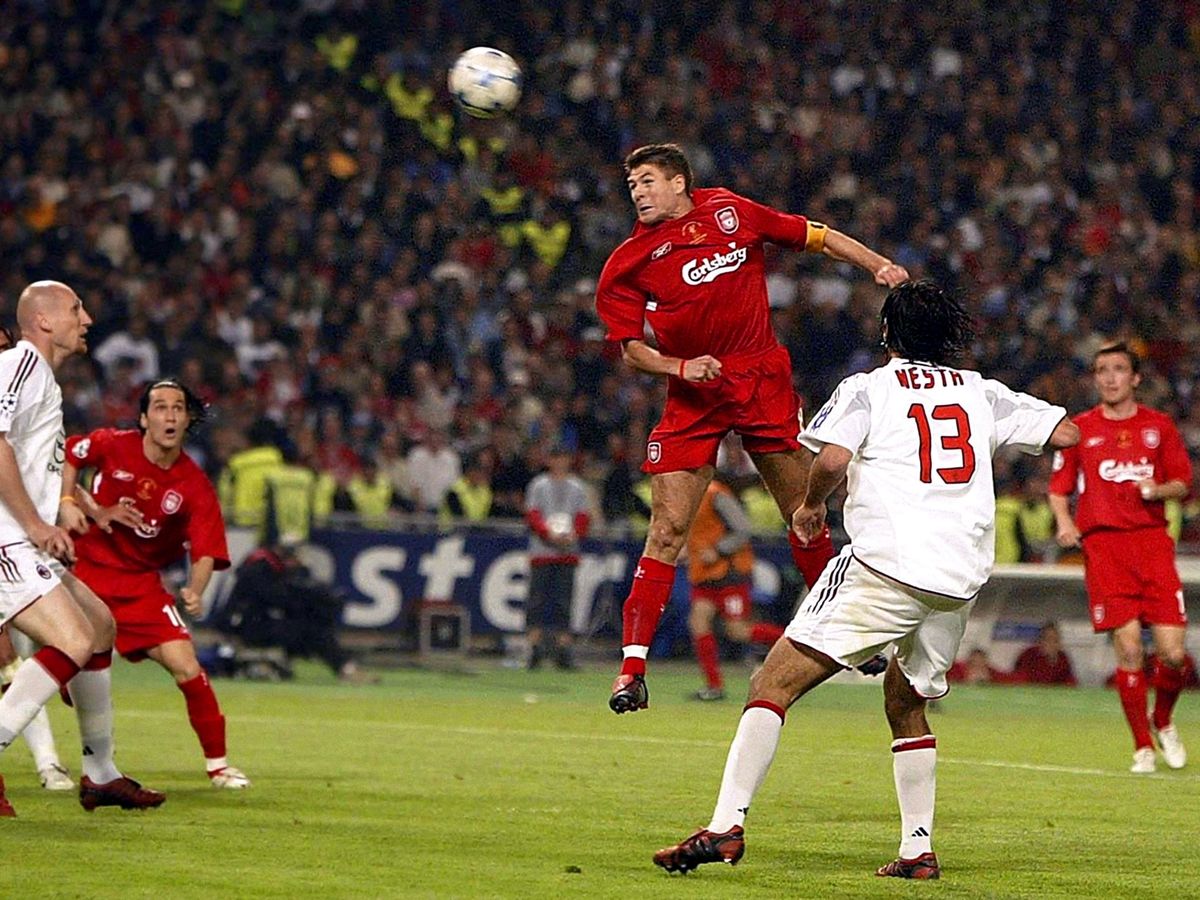 A minute later, Vladimir Smicer tried his luck from outside the box and beat Dida at his right-hand corner. It gave immense hope to the Merseysiders and the game was alive suddenly. A relentless Steven Gerrard won a penalty when he was bundled by Gennaro Gattuso in the box. He knew he almost did it with Xabi Alonso behind the ball from the spot.

The usually reliable Spaniard fumbled from the spot as his initial effort was saved by Dida. But he reacted wonderfully quick to convert the rebound. That’s it, they had done it. Right from the jaws of defeat, Liverpool equalled with AC Milan within 15 minutes of the restart. The sea of red inside the stadium and even outside it were in seventh heaven. The jaded Milan team dropped to the floor as they didn’t know what hit them.

But the game wasn’t over there as we had 30 minutes of regulation time and 30 minutes of extra time to decide the winner. Both sides had their chances but couldn’t score due to the heroic keepers. It set the stage for a nervy penalty shootout with nerves jangling with each kick. 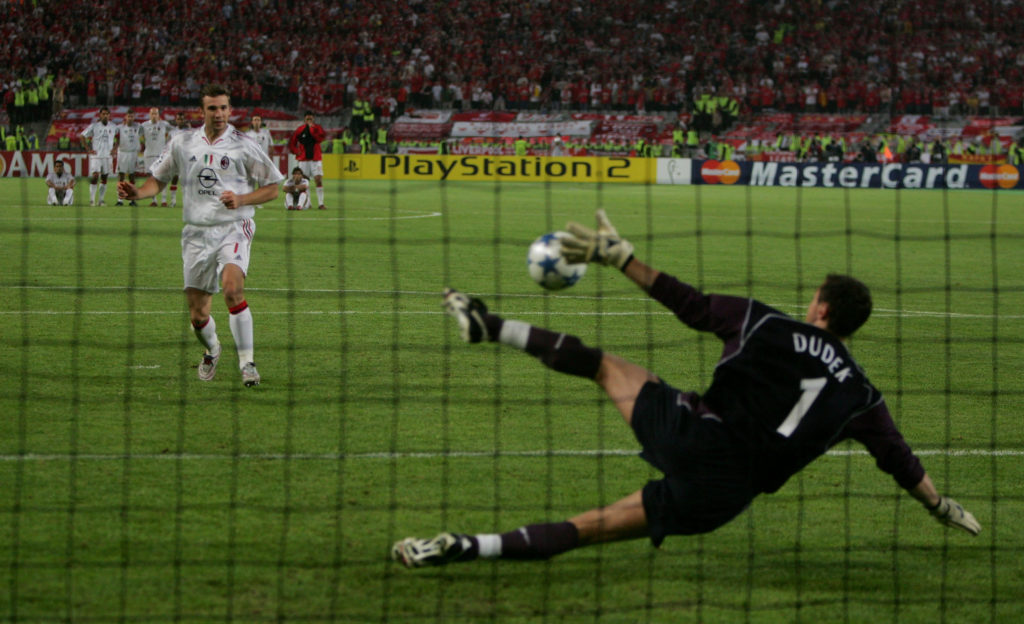 Dudek wins it for Liverpool (Photo-Metro)

Jerzy Dudek’s antics in the goal prompted Serginho, Milan’s first spot-kick taker to blast over the ball. Liverpool took the lead through Dietmar Hamann. Dudek was again exception as he dove to his right to keep Pirlo’s tame effort out. Djibril Cisse doubled Liverpool’s advantage. Jon Tomasson and Kaka converted their next two attempts for Milan with Liverpool only adding one in that time through Smicer.

It was all down to Milan’s fifth kick of the night. They were a save away from crumbling in the final. Shevchenko stepped up to take it and to his horror saw his effort saved by Dudek’s left hand. Liverpool won the game 3-2 on penalties after a 3-3 draw in the regulatory time.

The crowd were shocked and the players believed what transpired on the pitch. Gerrard pulled his troops together to lift the Big Ol’Ears for the fifth time in their history.

The beauty of a miracle is, you never realise while it’s happening. You just cherish it once it’s occurred. The same could be said about Liverpool’s miracle. Even the great Diego Maradona was speechless when asked about this game. He said that mighty Brazil oof yesteryears couldn’t have completed this comeback against that Milan side. 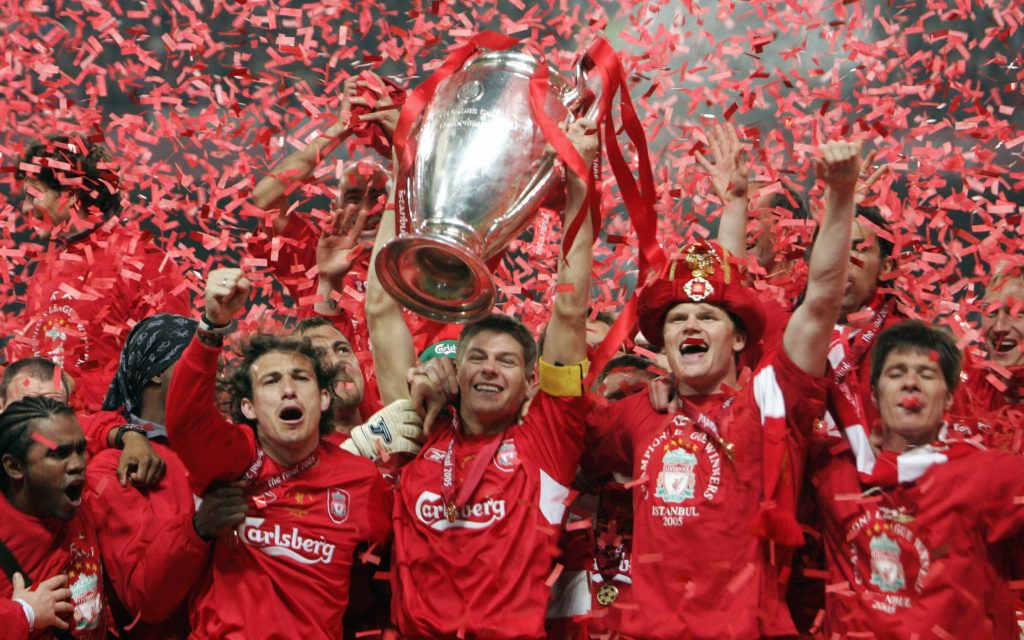 Milan players were absolutely dejected after the game. In his autobiography, Pirlo said that they sat motionless in the dressing room. They were drained of lien by the Liverpool side and felt horrors till date. He also added that they suffered from a new syndrome which he coined as Istanbul Syndrome.

The famous night became a legendary one in Liverpool’s rich folklore. It was grandly celebrated throughout the world and rightly so.

With AC Milan and Liverpool meeting again, the world hopes for another quality encounter that would create history again.

The post THROWBACK TO THAT MAGICAL NIGHT appeared first on FootTheBall.