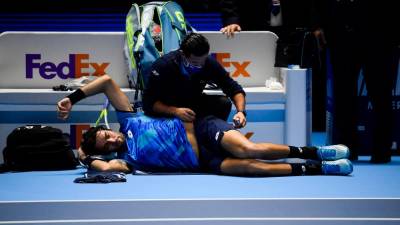 TURIN: Italy’s Matteo Berrettini broke down in tears after an abdominal injury forced him to retire from his opening ATP Finals match against Alexander Zverev, casting doubt over his participation for the rest of the season-ending tournament.

Olympic champion Zverev was awarded a win after Berrettini pulled out injured early in the second set, with the German leading 7-6(7), 1-0 on Sunday.

Berrettini was sidelined for two months due to an abdominal injury he suffered at the Australian Open in February.

The 25-year-old was unsure if the injury which forced him to retire on Sunday was a recurrence of the same problem.

“It is mentally really tough for me because I used to have an injury close to the same area, so it is tough to play,” Berrettini, making his second appearance at the ATP Finals, said after the match.

“Also, I don’t know what it is. I have to figure out what it is and then if it is nothing really big, maybe I can play.

“Tomorrow (Monday) with my team and the doctor I will do some checks and I hope it won’t be something that won’t let me play the next two matches.”

The world No. 7, who was playing in front of a home crowd in Turin, said it was “the worst day” of his career.

“It is just really tough to face. I really wanted to enjoy every second… The worst thing that could have happened, happened,” he said.

If Berrettini is not fit enough to continue in the tournament, Jannik Sinner would replace him as the first alternate. – Reuters