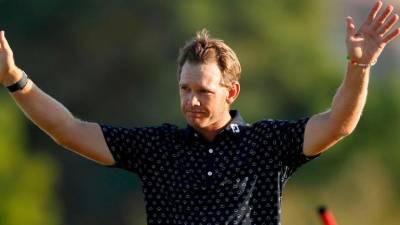 DUBAI: Denmark’s Joachim Hansen (pix) claimed his second European Tour title at the AVIV Dubai Championship on Sunday with a flawless final round of 68 to finish one shot clear of Italian Francesco Laporta and Austrian Bernd Wiesberger.

Hansen ended on 23-under par to earn a victory that secured his place in the field for next week’s season-ending DP World Tour Championship in Dubai.

The 31-year-old, who went into the final round sharing the lead with Laporta, made a good start by sinking a 10-foot birdie putt at the first hole and maintained his advantage.

“It means a lot, especially with family here and friends this time, there was nothing in Johannesburg,” said Hansen, whose maiden title on the Tour was at the 2020 Joburg Open.

“When I saw Jeff Winther win in Mallorca I was very jealous because he had all the family and friends celebrating, I really wanted that.”

Hansen endured nervy moments as Wiesberger produced a late birdie blitz at the Fire Course en route to a sparkling 65 and Laporta shot a steady 69.

“I struggled finding the middle of the club on the woods so I didn’t drive it well,” Hansen said.

“The putter helped me today, I putted a lot better than yesterday so that kept me in the game.”