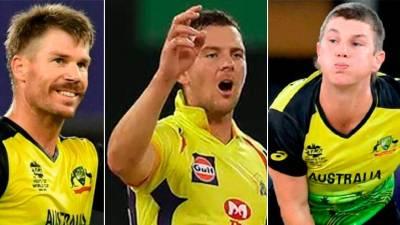 MUMBAI: Three players from champions Australia made the International Cricket Council’s team of the Twenty20 World Cup with Pakistan captain Babar Azam chosen to lead the side, the world governing body said on Monday.

Australia defeated New Zealand in Dubai on Sunday to finally win a maiden T20 World Cup and have the most players in the team picked by a selection panel of commentators, former international players and journalists.

Opening batter David Warner, who was adjudged player of the tournament, fast bowler Josh Hazlewood and leg-spinner Adam Zampa made the side.

South Africa, Sri Lanka and England had two players each in the team with Babar, the tournament’s top-scorer, and New Zealand seamer Trent Boult completing the team.

Pre-tournament favourites India, who failed to get past the Super 12 stage, did not have any players in the side.

“As with any team selection there will be varying opinions, and robust discussion on the final composition of the squad,” former West Indies fast bowler Ian Bishop, who works as a television pundit, said.

“The panel respects that, and we encourage the strong debate that will ensue. This team was incredibly difficult to select over such a highly competitive tournament. Selections were based predominantly on the Super 12 onward to the final.”

England’s Jos Buttler was chosen to don the wicketkeeping gloves with Moeen Ali picked as the all-rounder.

Batter Charith Asalanka and spinner Wanindu Hasaranga got the nod from Sri Lanka while Aiden Markram and fast bowler Anrich Nortje were the South Africans selected in the side. – Reuters