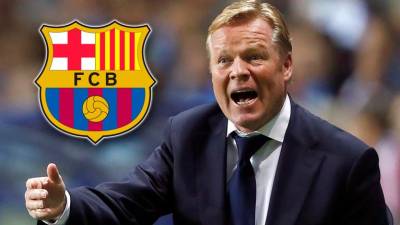 BARCELONA: Barcelona coach Ronald Koeman (pix) insists his resurgent team can still compete with the strongest in Europe as they prepare to take on a Paris Saint-Germain side missing Neymar in their Champions League last 16, first leg on Tuesday.

“I don’t see other teams who are much better than Barcelona, but I think it’s not good if you are changing a lot of things in the team, if you are playing with young players, to expect that we will win the Champions League,” Koeman told media ahead of Tuesday’s game at the Camp Nou.

Barcelona remain a club in crisis off the field, mired in debt and with a presidential election due next month, but playing results have turned around since they ended their Champions League group-stage campaign with a 3-0 home loss to Juventus in December.

Saturday’s 5-1 win over Alaves made it 10 wins and two draws in their last 12 Liga outings.

Lionel Messi has scored 11 goals in 10 appearances in that time, while Koeman continues to incorporate young players into his line-up.

“That means we can beat everyone. That’s what we like to show, that we can compete with the best teams in Europe.”

Clear underdogs when the draw was made in December and paired them with PSG, Barcelona may now even have the edge as their opponents arrive in Catalonia without the injured Neymar and Angel di Maria.

But Koeman warned: “You never know how a team will react to being without such an important player like Neymar. I hope that in a couple of weeks (the return leg is on March 10) everyone will be there and we can see who is the best team.”

The Dutchman also said he was “very hopeful” Messi would stay at the club amid speculation over the Argentine’s future beyond this season, when his contract expires. He continues to be linked to PSG as well as Manchester City.

“I am a much better player when Leo is on the field than when he is not. With Leo we are much better and much stronger,” said full-back Jordi Alba.

“We want him to stay at Barca for many more years, but it is Leo’s decision and we will have to respect whatever decision he takes.”

Meanwhile, Gerard Pique is in contention to return after close to three months on the sidelines with a knee injury. He could be needed in central defence with Ronald Araujo ruled out.

“Pique has been training with the squad for four or five days now. I have one more day to decide, and given how long he has been out we will talk about it and decide tomorrow,” Koeman said. – AFP

LeBron to Zlatan: No way I’ll ever ‘stick to sports’

Omollo: If Gor Mahia underrate Nzoia Sugar it would be planning to fail