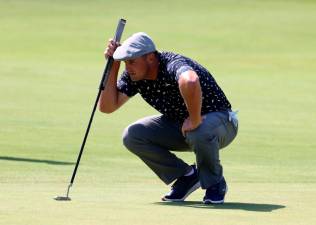 LONDON: Bryson DeChambeau (pix) compounded a poor round on the golf course with a public relations misstep Thursday after pinning his first-round woes at The Open Championship to his driver.

It would lead to an apology from DeChambeau later Thursday.

Speaking with the media after his 1-over par 71 at Royal St. George’s, DeChambeau said, “with the driver right now, it sucks.”

That remark earned a rebuke from the tour operations manager at Cobra Golf, the company that manufactures DeChambeau’s driver, the Cobra Radspeed, made exclusively for DeChambeau.

“He has never really been happy, ever. Like, it’s very rare where he’s happy,” Ben Schomin told Golfweek when informed of DeChambeau’s comments.

“It’s just really, really painful when he says something that stupid,” Schomin added.

Schomin even caddied for DeChambeau at the Rocket Mortgage Classic two weeks ago after the golfer parted ways with his longtime caddie Tim Tucker mid-week.

Later Thursday, DeChambeau issued an apology for his “unprofessional” comments.

“My frustration and emotions over the way I drove the ball today boiled over,” DeChambeau said. “I sucked today, not my equipment… I deeply regret the words I used earlier.”

DeChambeau’s second round begins Friday at 9:26 am. – Field Level Media