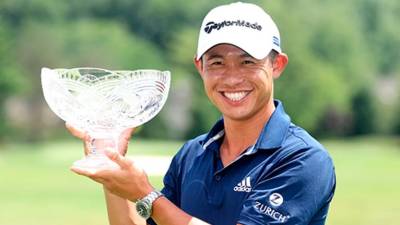 NEW YORK: After fending off a slew of big names to win last month’s PGA Championship, American Collin Morikawa is hungry for more success as this week’s US Open.

The 23-year-old showed great maturity when he triumphed at TPC Harding Park by two strokes, a remarkable achievement for someone who turned pro just last year.

“Yes, I’ve only done it once, but I’ve done it. You just want more,” he said at Mamaroneck, which is hosting the rejigged season’s second major from Thursday.

“You get that little taste of what it’s like, and you know why guys mark in their calendars the major championships for the year.”

Morikawa conceded while he is still trying to acquaint himself around the Winged Foot Gold Club, the experienced golfers will have the advantage of being more familiar with the course.

“Part of what I’ve been doing, playing only a year and a half in, is figuring out these courses Monday through Wednesday and that’s kind of all you get,” Morikawa, who believes Winged Foot is probably the toughest course he’s ever played, told reporters.

Morikawa returned from the Tour’s coronavirus-induced hiatus in June to place second at the Charles Schwab Challenge, where he came up just short in a playoff. He won the Workday Charity Open the next month, following that up with his unexpected PGA Championship win in August.

To pull off back-to-back major title wins, he will have to overcome the sport’s big players such as world No. 1 Dustin Johnson, defending champion Gary Woodland and 15-time major winner Tiger Woods.

Morikawa said he has not changed his approach too dramatically despite his recent success.

“I’m not waking up every day realising, yeah, I’m a major champion,” he said. “I’m realising we’re at the US Open, let’s go win another tournament.” – Reuters