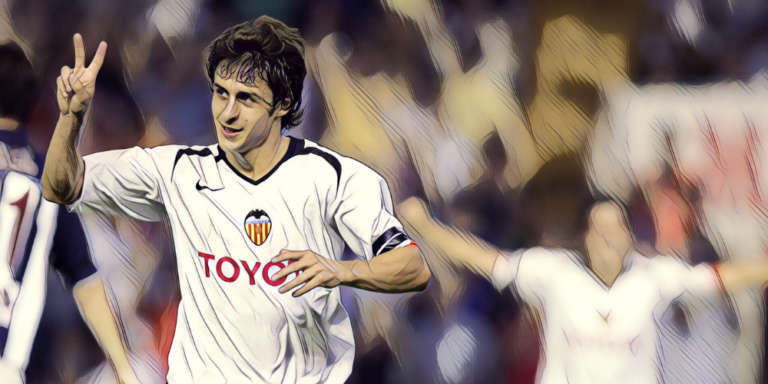 Pablo Aimar’s career burned both briefly and brightly, but the diminutive midfielder holds a special place amongst the pantheon of artistic Argentine playmakers.

One of several talented youngsters to have been dubbed with the often unhelpful moniker of ‘the next Diego Maradona’, it was expected that the graceful Aimar would take on the torch as La Albiceleste’s creative fulcrum.

Part of an exciting contingent of footballers to emerge in the late nineties, the guile and grace of Aimar saw the midfielder become an idol to none other than Lionel Messi, the impressionable latter enchanted with his compatriot’s fleet-of-foot and and balletic grace.

“Pablo Aimar was, and is, my idol,” said Messi of Aimar. “I really like to watch him play and I have followed his career since the beginning at River Plate.”

For arguably the greatest footballer the sport has witnessed to hold you in such esteem, it’s fair to say there was more than a fair bit of magic in Aimar’s boots.

Perfecting his tight control and graceful dribbling on the streets of Río Cuarto, a young Aimar was eventually inducted into the academy system of Buenos Aires giants River Plate, where he was awarded a first-team debut aged just 16.

The wider watching world were afforded a first glimpse of the budding Aimar’s gifts as an Argentina side including the likes of Juan Román Riquelme, Esteban Cambiasso, and Walter Samuel were crowned champions at the 1997 FIFA World Championship in Malaysia.

At that stage Aimar was viewed as arguably Argentina’s brightest talent and scored as an England team containing both Michael Owen and Jamie Carragher were beaten in the last 16, before victories over Brazil, Ireland and Uruguay crowned José Pékerman’s side champions.

Aimar would later return to Malaysia for an underwhelming spell at Johor Darul Ta’zim in his latter career, but not before a storied footballing venture.

Exceptional in close spaces and often providing a perfect weight of pass, his effortless manipulation of the ball brought interest from Europe in a footballer dubbed El Mago.

Real Madrid had shown interest, but it was divisional rivals Valencia – a side who had reached the Champions League final just months earlier – who won the race, spending a club-record £13m to bring Aimar to Spain.

His first six months at the Mestalla saw Los murciélagos progress to a second successive European showpiece, with Aimar playing a central role as Premier League opposition in Arsenal and Leeds were beaten en route to a final meeting with Bayern Munich.

Unable to influence the final amid the close attentions of Owen Hargreaves, he was substituted at half-time in a disappointing performance on club football’s grandest stage as Valencia were beaten on penalties.

Success, however, was not far away.

The end of Héctor Cúper’s reign saw Rafael Benitez take charge at the Mestalla, a manager less indulgent of Aimar’s unrestrained role but who recognised the impact the Argentine’s invention could have on his side.

Benitez’s team became more defensive than during the Cùper era, but their resilience brought results as Valencia were crowned champions during the 2001/02 season, finishing seven points clear of Deportivo La Coruña.

Valencia’s 51 goals scored were significantly less than each of the four sides below them, though their defensive strength and midfield balance – Aimar operating at number 10 in Benitez’s 4-2-3-1 formation – laid the foundations for a first league title in three decades.

An Argentinian playmaker admired by Maradona and Messi…

To place their success into contest, only Atlético Madrid in 1996 and Deportivo La Coruña in 2000 had broken the duopoly of Real Madrid and Barcelona in the previous 17 seasons

Aimar’s pure numbers were far from prolific with just four league goals scored that season, but his eye for a pass and, more crucially, willingness to work back and overload the midfield made Valencia a formidable proposition.

Valencia were unable to defend their title against Real Madrid’s Galacticos the following season, whilst their Champions League run was ended by Inter Milan in the quarter-finals, despite the best efforts of Aimar.

He capped a wonderful flowing move against Liverpool in the group stages and finished as the competition’s leading assist provider, alongside Rui Costa.

Throwback to Pablo Aimar at Valencia

Valencia, remarkably, returned to the summit of Spanish football in 2003/04, an even greater triumph that came alongside UEFA Cup success, with Aimar providing the ammunition for the prolific Mista leading the line.

Injuries – fitness issues that would become increasingly problematic – hindered his impact in that double-winning season, however, the zenith of Valencia’s greatest era.

Reflecting on his time with Valencia, which ended following a transfer to Real Zaragoza as his influence waned, Aimar pondered whether we would have witnessed another version of his gifted genius had he instead signed for a side more ambitious in their tactical approach.

“I don’t know what would have happened if, as a young player myself, I’d have gone somewhere other than Valencia,” he told the Guardian. “I had come from River Plate, where we often had 70% of possession. At Valencia, we had much less of the ball.

“I enjoyed the team’s style of play, but I had to grow up, adapt and understand how we could compete – which we did for several years, even winning the league in 2002 and 2004. That was how we competed with the big clubs, so I learned to make the most of playing less with the ball.”

The move to Zaragoza – following an underwhelming time under Claudio Ranieri at Valencia – came as a surprise given reported interest from the Premier League and former manager Benitez, who now had taken charge at Liverpool.

Whilst viewed as a step down, the transfer saw Aimar combine with compatriot Diego Milito as Zaragoza finished the season seventh, rekindling glimpses of his former magic in the process.

The club’s fortunes deteriorated rapidly, however, relegated the next season following financial issues and the loss of key personnel, leaving Aimar to move on once more, signing for Benfica.

If Valencia’s pragmatism had nullified some of Aimar’s innate extravagance, a free-scoring Benfica side proved a fine fit as the midfielder joined a strong South American contingent including Óscar Cardozo and Ángel Di María.

Javier Saviola arrived the following season to add to the Argentine firepower at Benfica’s disposal, with Aimar’s second season in Portugal resulting in a domestic double, the aforementioned Cardozo gratefully accepting the gifts received from his creative colleagues to net 38 times in all competitions.

For Aimar it was a return to his natural instincts, operating in half-spaces and gliding towards backlines, often finding the right pass at the right moment – an ability he believes separates the good from the great.

“I am convinced that football is not about what, but when,” he said. “The best footballers, beyond the fact that they do everything well, stand out because they know when to do things.”

Still just 28-years-old upon his arrival in Lisbon, he spent five seasons in the Portuguese capital as the fun-factor returned to his game, tricks, flicks and much more as he enjoyed his most settled period since the dizzy heights of Valencia’s greatest successes.

Malaysia was his next port of call on a lucrative contract, though injuries restricted him to limited appearances and led ultimately to his eventual retirement.

There was still time for solitary goodbye appearances back at River Plate in 2015 and first club Estudiantes de Río Cuarto three years later, the latter a fitting farewell for one of the most captivating creative talents of the early 2000s.

Aimar belongs to an era of  Argentines who failed to bring success to the national side, but whose talents are cherished even given a barren run on the international stage.

Alongside the likes of Juan Román Riquelme and Juan Sebastián Verón, he was a footballer fans clamoured to see, delicate and decisive when dancing towards opposition defences with the ball at his feet.

The post Midfield Magicians: A playmaker so talented Messi idolised him, Pablo Aimar first appeared on The Football Faithful.