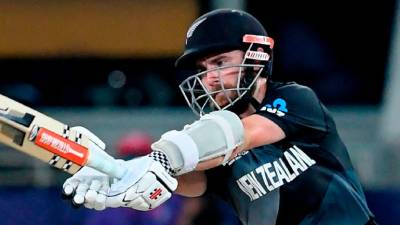 NEW DELHI: New Zealand captain Kane Williamson (pix) will sit out this week’s Twenty20 internationals against India to focus on the upcoming Test series, the Black Caps said as they confirmed their squads Tuesday.

The talismanic batsman has been in blazing form, hitting 85 off 48 balls in Sunday’s T20 World Cup final defeat to Australia in Dubai.

The 31-year-old arrived with the squad in Jaipur on Monday, with the first of three T20 internationals against India taking place on Wednesday.

Paceman Tim Southee will captain the Twenty20 side for the matches in Jaipur, Ranchi on Saturday and Kolkata on Sunday.

Southee said he was upbeat about leading the side, but admitted the tight scheduling and the team’s long spells in Covid bubbles were concerns.

“It’s three games in five days with travel days in between and then after a couple of days we’re into a Test series,” Southee told reporters during a virtual press conference.

“(But) it’s something we can’t control. This is something we just have to adapt to and get used to, but it does take its toll,” added the 32-year-old.

“I know a few players that have been in a number of bubbles for long periods of time (and) it does weigh (you) down after a while, so hopefully we don’t have to deal with bubbles for too much longer.”

The two-Test series begins in Kanpur on Nov 25. The second Test is in Mumbai from Dec 3.

Indian Test skipper Virat Kohli will also be rested for the Twenty20 games.

The players are likely to have to contend with high levels of air pollution across northern India for the tour, particularly in Jaipur and Kanpur. – AFP