‘We need a different Italy’

‘We need a different Italy’ 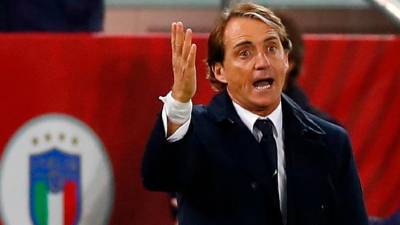 LONDON: Italy have been here before. And it did not end well.

Four months on from their Euro 2020 triumph, Italy’s 0-0 World Cup qualifying draw in Northern Ireland on Monday opened the door for Switzerland to seal automatic qualification from Group C, condemning the Azzurri to a playoff spot once more.

The European champions failed to qualify for the last World Cup after defeat over a two-legged playoff to Sweden – the first time they had not reached the finals of the tournament since 1958.

The playoff system is different this time, but fears linger when it comes to Italy’s prospects of reaching a finals via the back door.

Turin-based newspaper Tuttosport‘s headline on Tuesday, following the Northern Ireland stalemate, insisted the country needed “a different Italy” team, one that can get the job done, while Gazzetta dello Sport said the “nightmare continues.”

The new World Cup playoff system means that Italy must get past two teams to reach Qatar – via a one-legged semifinal and a final.

While head coach Roberto Mancini was adamant that they remain confident of reaching next year’s finals, there was bewilderment as to why they failed to qualify automatically.

“We should have sealed qualification at least two games ago,” Mancini said.

“We had the chances and didn’t take them, now we’ve got to keep our feet on the ground, because there’s still the possibility of qualifying for the World Cup.”

Since winning their second European championship in July after beating England on penalties at Wembley, Italy drew four out of five World Cup qualifiers, against teams below them in the FIFA rankings.

Even with their stuttering form – falling at the semifinal stage when hosting the Nations League finals last month – Italy looked to have unconvincingly edged themselves into position to secure automatic qualification against Switzerland last week.

However, midfielder Jorginho’s last-gasp missed penalty took qualification to the final round of games with the Swiss getting over the line, as memories of the Sweden embarrassment came flooding back.

“We need to recharge the batteries, both physical and mental, rediscover the determination and joy in our football that we had at the Euros,” captain Leonardo Bonucci said.

“We played football with the joy of doing it and not with the pressure of having to prove something. Perhaps becoming champions of Europe has unconsciously changed something.”

The Azzurri have certainly turned things around under Mancini following that disappointment against Sweden four years ago, coming full circle to take the Euro 2020 crown.

Their World Cup hoodoo, however, is proving more difficult to shift. – Reuters