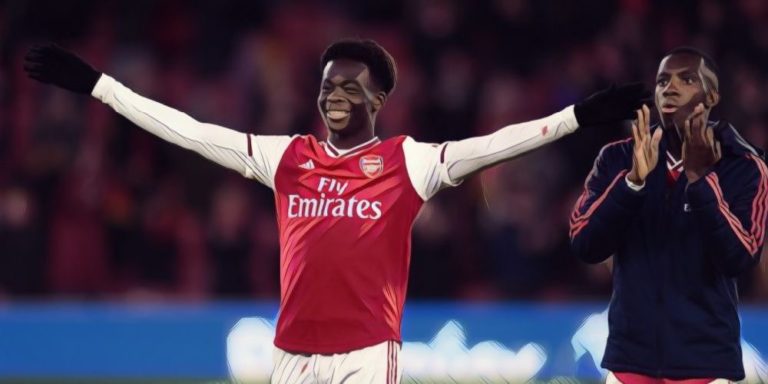 The teenager emerged as one of the surprise packages of the summer, forcing his way into Gareth Southgate’s side with a strong display against Czech Republic in the final group game, before going on to feature in three of the four knockout games, including as a second-half substitute in the final against Italy.

Although the showpiece saw the 19-year-old ultimately miss the decisive penalty to deny England victory, that should not overshadow what was a fine month for the Arsenal star, while nor should it have warranted the appalling racist abuse that he has suffered since.

For many, the versatile forward was a breakout sensation at Euro 2020, yet for others – particularly those at Arsenal – they have been fully aware of his talent for a long time, the player having arguably been the club’s best player over the last 18 months or so.

In a difficult period at the Emirates, Saka has been one of the few shining lights, notably netting seven goals in all competitions last season and has demonstrated his versatility in playing in a number of different positions.

Ahead of the new season, which kicks off on 13 August, Gunners boss Mikel Arteta has heaped praise on his young starlet and insisted that he should be ‘really proud’ of what he achieved for his country, before claiming that having the support of the Arsenal faithful is a ‘much bigger trophy’ than the silverware he missed out on last weekend.

“He was our Player of the Season, I think he has earned the respect and admiration of everyone at the football club,” said Arteta.

“But not only that, he’s gone to an international stage, he started the European competition with an injury and still he has managed to be in the starting XI.

“He reached the final and he couldn’t lift that trophy but I think he has a much bigger trophy than that, and that’s that now he really knows that in good and bad moments, everybody at the club, every Arsenal fan and every English fan is right behind him.

“He has earned that with his behaviour, his talent and with the way he is. That’s going to be there for the rest of his life. A trophy is there in the wardrobe and then you have to be the man in the next one.

“But what he has achieved and how he has united people is very powerful and he should be really, really proud of that.”

The Spaniard went on to laud the youngster’s impressive ‘maturity’, before challenging him to ‘raise his game again’ and further ‘improve’

“The maturity that he has shown at his age is pretty special, I have not seen many of those – and now he is going to have to cope with other things over the next year, it is going to be about expectations.

“Can he do it again? Can he raise his game again, can he improve, can he keep making better decision, be more consistent, start to win more regularly? That is the thing that he needs to do that at this very early stage in his career.”

Read – There is a lot to love about this England team. For the supporters, there is only hate.