Remembering the Real Madrid XI that won ‘La Decima’ in 2014

Remembering the Real Madrid XI that won ‘La Decima’ in 2014 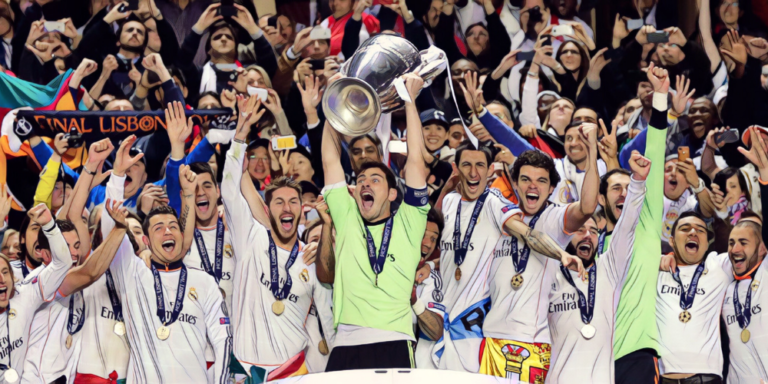 Few clubs are as obsessive in their pursuit of Champions League success quite like Real Madrid, the Spanish giants having enjoyed a special relationship with club football’s biggest prize since winning each of the first five editions of the tournament.

Their tenth title, the fabled La Decima, proved a longer wait than expected for Los Blancos, coming in dramatic fashion and 12 years after their previous triumph on the European stage.

Carlo Ancelotti’s side faced rivals Atletico Madrid in the first ever Champions League final between two teams from the same city, securing a historic tenth trophy following a gripping showpiece in Lisbon.

A 4-1 victory after extra time marked the start of a period of dominance in continental competition for Real Madrid, the first of four Champions League trophies won in just five seasons, including a second final success against Atletico two seasons later.

Here is the Real Madrid XI that won ‘La Decima’.

An iconic figure in Real Madrid’s history, Iker Casillas rose through the academy ranks to become one of the greatest goalkeepers of his generation.

Casillas made 725 appearances in all competitions and won five league titles and three Champions League trophies, in addition to captaining Spain during an unprecedented period of international success in winning three consecutive major tournaments.

Casillas made just two league appearances in 2013/14 after falling behind Diego López in the pecking order, but was selected in European competition and started the final win.

It was far from a vintage performance from the veteran however, his huge error of judgement allowing Diego Godin to open the scoring for Atletico.

Having been allowed to leave for Bayer Leverkusen without making a senior appearance, Real Madrid triggered a buy-back clause in Carvajal’s contract after just one season in Germany, ahead of the 2013/14 campaign.

He featured regularly and started the final win over Atletico, showing his willingness to push forward despite some nervy moments defensively.

Carvajal has since gone on to make 294 appearances in all competitions for Los Blancos, winning a further three Champions League winners’ medals.

The man who rescued Real Madrid with a dramatic 93rd-minute equaliser to force extra-time, Ramos’ late, late goal was one of the defining images of an incredible career in the Spanish capital.

He scored again in the final win over Atletico in 2016 to join an exclusive list of players to score in multiple finals, part of a staggering 101 he scored during his time with the club.

One of the greatest defenders of his generation, he left Real Madrid to sign for PSG this summer, having made 671 appearances and won 22 trophies during a 16-year association with arguably world football’s biggest club.

Selected ahead of the vastly more experienced Pepe in central defence, the 21-year-old was largely unflustered after being thrust into club football’s biggest fixture.

Varane’s calm and composed performance has become a trademark of his game during a decade with Real Madrid, the World Cup winning centre-back amongst the best defenders in world football at present.

Another surprise inclusion ahead of Marcelo, Coentrao performed solidly enough before tiring and being replaced by the more attacking Marcelo just before the hour.

The Portugal international signed for the Spanish giants in a €30m deal in 2011 but largely struggled to establish himself given the presence of Marcelo, who came off the bench to score Real’s third goal in their 4-1 final win over Atletico.

Included in place of the suspended Xabi Alonso, Khedira lacked sharpness having played just two games in the previous seven months due to injury.

The Germany international was ineffective throughout and substituted for Isco on 59 minutes. He spent a further season in Spain and made 161 appearances in total for Real Madrid, before a successful spell in Italy that brought five league titles with Juventus.

Grew into the game after initially struggling to impose himself on an industrious Atletico midfield, before providing the equaliser as his corner kick was headed home by Ramos with just seconds remaining.

After a difficult start to his Real Madrid career after signing from Tottenham, the Croatian schemer has since established himself as one of the finest midfielders of his generation after winning two league titles and four Champions League trophies in Spain.

Named as winner of the Ballon d’Or in 2018, Modric is the only player to break Cristiano Ronaldo and Lionel Messi’s duopoly of the award in the past 13 years.

The best player on the pitch for much of Real’s La Decima triumph, Di Maria’s trickery and direct running posed problems throughout and it was a surging run from the Argentine that led to Gareth Bale’s breakthrough goal to make it 2-1 in extra time.

Di Maria was surprisingly allowed to leave that summer after four seasons in Spain, joining Manchester United in an ill-fated £59.7m British transfer-record deal that lasted just one season.

He moved on to PSG the following year after an unhappy period in the Premier League, where he has since won four Ligue 1 titles.

Gareth Bale became the world’s most expensive footballer after joining Real Madrid in an £80m deal in 2013, his debut season ending in perfect fashion after scoring the decisive second to crown the Spaniards champions of Europe.

Bale won four Champions League trophies across his first five seasons in Spain, but fell out of favour under Zinedine Zidane despite an impressive record of 105 goals in 251 appearances.

The Wales international spent the 2020/21 season on loan at former club Tottenham, but has since returned to Spain following the return of La Decima-winning manager Carlo Ancelotti at the Bernabeu.

Real’s leading light endured a frustrating evening for much of the final, though had the last word after winning and converting a penalty for the fourth goal as Champions League success was secured.

It was a second winners’ medal for Ronaldo after first tasting success with Manchester United, whilst his five wins in the competition are a record in the Champions League era.

Ronaldo spent nine seasons with Real and became the club’s all-time record goalscorer with an astonishing 450 goals in just 438 appearances, the five-time Ballon d’Or winner now continuing to set unprecedented standards and break records in the colours of Juventus.

A fitness doubt before the final, Benzema struggled to make an impact with his chances limited, failing to find an opportunity against a resilient Atletico defence before being substituted for Alvaro Morata after 79 minutes.

Benzema has been a fine servant for Real Madrid after spending  over a decade at the Bernabeu, his 279 goals the fifth-highest figure in the club’s history.

Benzema has shouldered added responsibility since the departure of Ronaldo for Juventus, scoring 87 goals across the past three campaigns after becoming the focal point of the Real side.

The post Remembering the Real Madrid XI that won ‘La Decima’ in 2014 first appeared on The Football Faithful.