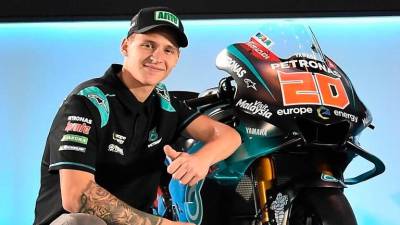 The 21-year-old Frenchman was thrown onto the circuit’s tarmac after losing control of his Yamaha SRT satellite bike when braking into a bend.

Flung over his twisting machine he hit the track hard, sliding tens of metres before finally coming to a rest in the safety gravel.

A doctor was immediately at his side and he was stretchered off, grimacing, to the on-site medical unit.

After being checked over his team announced: “News about Fabio: rider is OK. He has pain in the hip, but Xrays confirmed that nothing is broken.”

The crash was similar to the one he had in Friday’s opening practice with riders struggling in the cold conditions which is making tyre temperatures difficult to control.

While he thankfully avoided more serious damage the accident will hardly help his performance this weekend in the 10th leg of the season as he tries to consolidate his 10-point lead over Joan Mir in the championship standings.

Quartararo had already assured himself of the third fastest combined practice time behind the Yamaha factory bike of Maverick Vinales, whose teammate Valentino Rossi is absent after testing positive for Covid-19.

Placed second in the time sheets is Quartararo’s SRT teammate Franco Morbidelli with Honda’s Cal Crutchlow in fourth. Mir is placed sixth with the top 10 getting an automatic pass to second qualifying. This group are joined by the two fastest in Q1 to determine the first dozen places on Sunday’s grid. – AFP