Muhammad Fakrul , 18, shoots 5-under to clinch victory at Kedah Qualifier

Muhammad Fakrul , 18, shoots 5-under to clinch victory at Kedah Qualifier 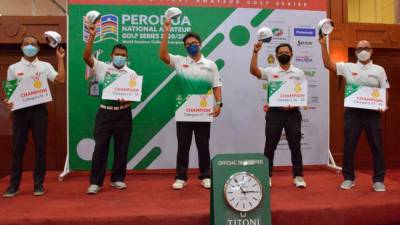 PETALING JAYA: One-handicapper, Muhammad Fakrul Aiman, posted a 5-under par 67 to clinch the Gross and Medal A champion at the Kedah qualifying round of the Perodua National Amateur Golf Series (PNAGS) held at Kulim Golf and Country Resort on Sunday.

Fakrul, who is also the club champion and former SportExcel champion, will lead the Kedah team to the Perodua National Amateur Golf Series National Final in Forest City Golf Resort in Johor on Jan 22, 2022.

Other winners for the five handicap categories were Medal B player, Omar Saleh (six) who collected 69 nett shots, Medal C and 13-handicapper, Khor Jia Zhe, who scored an outstanding nett score of 62.

For category D and E, Muhammad Zikrilhafiz (20) and Sabri Ahmad (22) shot 66 and 63 nett respectively to also qualify for the national final.

There are remaining of another six states qualifying rounds to be completed before staging the National Final in Johor next year.

Golfers are encouraged to register on-line quick for the qualifying rounds slots in Melaka, Kelantan, Perlis and Sarawak which are still available. Terengganu qualifier which is scheduled this weekend are fully booked, so is Sabah qualifier scheduled on Dec 26.

The return of PNAGS is good news for local golfers and the golfing industry itself and precautions are taken following the MGA’s Mandatory Standard Operating Procedures (MSOP) which include only fully vaccinated players allowed to participate in the tournament.