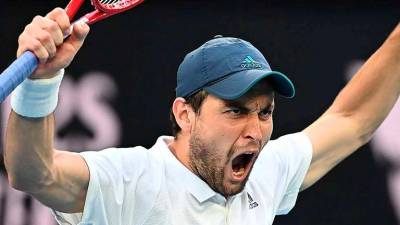 MELBOURNE: Novak Djokovic is one of the best-known sportsmen in the world but his semifinal on Thursday will be against a player he confessed he was unaware of until this year’s Australian Open.

The top-ranked men’s player would not be the only one in the tennis circuit who would not have previously heard of the 114th-ranked Russian Aslan Karatsev (pix), 27, before 2021.

But in the past two weeks on Melbourne Park’s blue hardcourts, the qualifier has ensured he has the firm attention of the tennis world by becoming the first man in the open era to reach the last four in his maiden Grand Slam.

A victory on Thursday at the Rod Laver Arena will make Karatsev the first qualifier to reach a major final in the Open Era, and the lowest-ranked man to reach a Grand Slam final since No. 125 Goran Ivanisevic at Wimbledon in 2001.

“It’s unbelievable, I’m so happy for Aslan, he’s made history. I don’t know what he did in the pandemic, probably just worked hard I guess,” Daniil Medvedev said on Wednesday after reaching the semifinals.

Before qualifying for his maiden Grand Slam in his 10th attempt last month, Karatsev found consistency on the ATP Challenger Tour in 2020 where he lost just two out of his last 20 matches since tennis’ restart after the pandemic.

Karatsev, who was forced on the sidelines for six months in 2017 due to a knee injury, was also a member of the Russian team that won the ATP Cup event where Medvedev called him the “secret weapon” in doubles.

“He’s going to play a lot of tournaments now without any pressure for the remainder of the 2021 season in terms of getting into the main draws and a big pay cheque will also be a huge boost for him,” Kafelnikov told the ATP website.

The Russian has already taken down three seeded players at the 2021 Australian Open but on Thursday faces an opponent who has lifted the Norman Brooks Challenge Cup a record eight times.

The 33-year-old Djokovic has looked in trouble at times during the tournament, including an abdominal injury, but has found a way past the problems to keep his campaign for an 18th Grand Slam title on track.

Djokovic is unbeaten on the Melbourne Park centre court since an injury-hampered fourth round defeat to South Korea’s Chung Hyeon in the 2018 tournament and has said the Rod Laver Arena feels like his “living room”.

A defeat to top seed Djokovic in a first career meeting will, however, not stop Karatsev from breaking into the top 50 of the ATP rankings on Monday for the first time and give him a platform for a strong year on the circuit. – Reuters