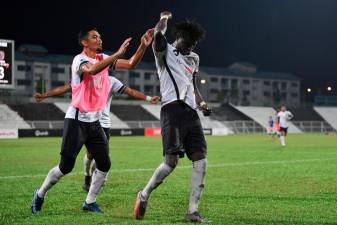 TFC II coach Badrul Afzan Razali said the presence of Mintah, who had previously been unable to play six matches as he was playing for the TFC team, gave a much-needed injection of motivation to the other players.

“Mintah’s presence motivated the players to a certain extent. When Mintah was there, other players automatically became motivated and enthusiastic. But I always tell the boys not to rely on Mintah alone,” he told reporters after the match at the Sultan Ismail Nasiruddin Shah Stadium, here last night.

The Ghanaian import emerged as the team’s hero when he scored two goals, in the 40th minute and the winning goal in the 90th minute, apart from two other goals from Argzim Redzovic (51’) and Masaki Watanabe (82’) for the team’s second win since beating the FAM-MSN Project Squad 4-0 on March 6.

Badrul said that he did not expect the victory, but his team took the opportunity in the final moments of the match after realising that the visitors seemed to have lost their momentum when both teams were tied 3-3.

Meanwhile, JDT II head coach Rafael Francisco Gil Sanchez said that despite being disappointed to have to go home empty-handed, he was still proud of the performance of his players who struggled until the end of the match.

“They played very well in both first and second half of the game. However they make some mistakes and we need to work on the mistakes and try to win the next game against Kelantan FC this Friday,” he said.- Bernama