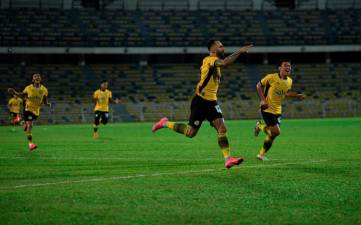 KUALA LUMPUR: Perak FC (pix) put up a gritty performance to hold Kedah Darul Aman (KDA) FC to a 1-1 draw at the Perak Stadium in Ipoh tonight and deny the Red Eagles from moving up to second spot in the Super League standings.

After a scoreless first half, hosts Perak FC opened accounts through naturalised striker Guilherme de Paula, who he headed home a cross from Raianderson da Costa Morais in the 58th minute.

But the Red Eagles, coached by Aidil Sharin Sahak, managed to level the scores through their Liberian import, Kpah Sherman, who slotted home a cross from Kipre Tchetche in the 78th minute for a share of the spoils.

The draw ensured KDA FC remained third in the 12-team standings with 17 points, with Johor Darul Ta’zim (JDT) perched at the top with 23 points and Terengganu FC (TFC) second with 18 points.

Meanwhile, Sabah FC notched their second win in nine outings so far this season when they hammered basement side UiTM FC 4-0 at the Likas Stadium in Kota Kinabalu.

In the Premier League, TFC II ended their run of six straight draws with a stunning 4-3 win over JDT II at the Sultan Ismail Nasiruddin Stadium in Kuala Terengganu.

Ghanian Jordan Mintah was the hero for the Turtles when he scored the opening goal in the 40th minute and the winner in the 90th minute while teammates Argzim Redzovic (51st) and Masaki Watanabe (82nd) chipped in with one goal apiece.

This was TFC II’s first win since defeating table-proppers FAM-NSC Project Squad 4-0 in their opening match on March 6.

The FAM-NSC Project Squad, meanwhile, continued to be the whipping boys of the Premier League when they fell 3-0 to Kelantan United, who found the net through Muhammad Asraff Aliffuddin Yasin (42nd), Mohamad Hariz Kamarudin (86th) and Alfusainey Gassama (89th).

It was the FAM-NSC Project Squad’s eighth loss in nine matches.- Bernama