For Iraq’s Olympians, the Tokyo dream is just taking part

For Iraq’s Olympians, the Tokyo dream is just taking part 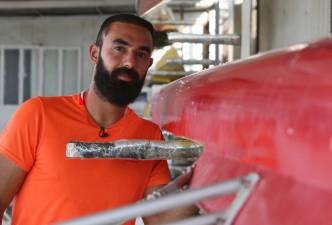 BAGHDAD: For the four Iraqi athletes who have made it to Tokyo, there is no realistic talk of medals. Having overcome war, politics and pandemic, their dream is simply to participate.

With state financial support cut off by political infighting for most of the run-up to the Games and their locked-down foreign coaches unable to offer more than virtual advice, Iraq’s small squad of Olympians got there almost entirely by their own efforts.

Right up to November of last year, when a new national Olympic chief was elected, watched over by the International Olympic Committee by video link, Iraq’s very participation in the Games was in doubt.

A nearly two-year battle for control of the National Olympic Committee’s US$25 million (RM105m) budget had seen Iraq ostracised by the IOC and its athletes deprived of the monthly stipends they rely on to prepare for competitions.

But despite the loss of state financial support and the difficulties of travelling to qualifying events during the coronavirus pandemic, two Iraqi hopefuls managed to qualify for Tokyo.

Rower Mohammed Ryadh, 27, will take part in the men’s single sculls for the second Games in a row.

But he has no illusions about his medal chances after his French coach of the past nine years, Vincent Tassery, was prevented by restrictions linked to the pandemic from travelling to Baghdad for the rower’s training sessions on the Tigris.

“I have a French trainer and because of Covid he hasn’t been able to come to Iraq so he sends me instructions by e-mail that I have to work on by myself,” Ryadh told AFP at his makeshift training base on the river bank.

“So the goal is just to take part in the Olympic Games. We both know it’s not worth even thinking about a medal,” the rower admitted.

To date, Iraq has won just a single Olympic medal – a silver for weightlifting in Rome in 1960 – but it is not for want of trying.

At the 2016 Rio Games a total of 21 Iraqi athletes competed in an array of disciplines including football, judo, boxing and athletics as well as rowing.

But this year just one other Iraqi apart from Ryadh qualified as of right – sprinter Dana Hussein, 35, for the women’s 200 metres.

Hussein left it to mid-June to claim her berth with a qualifying time of 22.51 seconds as she took gold in the pan-Arab athletics championship in Tunis.

The four makes up Iraq’s smallest squad of Olympians since its Games in London in 1948.

Iraq’s Olympians were all children when Saddam Hussein’s long years in power came to an end in the US-led invasion of 2003.

But the country’s Olympic movement is only now recovering from the brutal two-decade grip of the dictator’s sadistic eldest son Uday who allegedly tortured athletes he deemed to have underperformed.

The committee Uday headed was dissolved by the US-led occupation authority after the invasion along with all of the other instruments of Saddam’s rule.

But the manner of its dissolution, and the uncomfortable fact that Saddam’s Iraq took part in multiple Olympics before the dictator’s overthrow, left a question mark over the legitimacy of the body that replaced it.

That cleared the way for the sports ministry to launch a campaign to oust it in February 2019, leaving athletes in financial limbo as the rump committee battled for control with a commission appointed by the ministry.

A new committee was finally set up last year which held fresh elections to the IOC’s satisfaction in November and Iraq returned to the Olympic fold.

But little of the state funding filters down to help individual athletes cover the travel and training costs involved in qualifying.

“What’s sad is that you go to these qualifying events and our authorities really don’t care,” sprinter Dana Hussein told AFP.

“It’s taken me 18 months of effort to book my place in Tokyo. I myself had to pay many of the costs of getting training abroad because the athletics federation has very limited means.”

Hussein called for the Iraqi authorities to draw up a long-term plan for the investment in sports infrastructure the country was deprived of during decades of war and international sanctions.

“We need a long-term roadmap – money, equipment and a modern sports infrastructure,” she said. – AFP