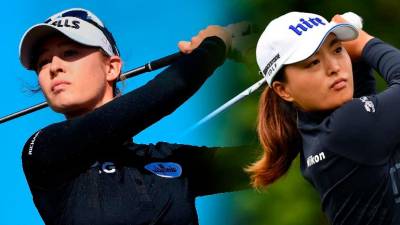 MIAMI: World No. 1 Nelly Korda’s season-long duel with second-ranked Ko Jin-young reaches its climax on Thursday as the two rivals tee off in the LPGA Tour Championship at Tiburon Golf Club in Florida.

Korda and Ko have dominated women’s golf in 2021, regularly swapping the world No. 1 ranking while sharing eight tournament wins between them, with Korda also grabbing an Olympic gold medal into the bargain.

Korda is hoping to crown a dazzling season with a fifth LPGA Tour victory, and arrives at this week’s season-ending tournament in Naples fresh from a roller coaster win in the Pelican Championship on Sunday.

The 23-year-old US star has already gone back-to-back once this year, winning the Women’s PGA Championship in June, one week after triumphing in the Meijer LPGA Classic in Belmont, Michigan.

Korda however has been careful to conserve energy leading into this week’s event in the wake of her win in the Pelican, when she survived a triple bogey on the penultimate hole before prevailing in a playoff.

“Last week was definitely a confidence boost, but I’ve always said it’s really hard to kind of win back to back because you’re definitely a little mentally and physically drained from the week prior,” Korda said.

Korda says her stellar year was driven by the disappointment of a missed cut at the rescheduled US Women’s Open last December.

“I think that was kind of my turning point where I just kind of changed my demeanor a little out there,” Korda said. “I was really disappointed after that missed cut. I kind of turned it on after that.”

Korda admits meanwhile that she is still adjusting to the trappings of success, revealing that reorganising her trophy cabinet is one of her off-season priorities.

That will include finding a place for her Olympic gold medal, which has accompanied her around the world since her victory in Tokyo in August – tucked in a sock for safekeeping.

“Every single time I went through (airport) security I got stopped and I was like, ‘Okay, just be really careful with it when you pull it out. Don’t scratch it!’”.

Ko meanwhile heads into this week’s event as the defending champion.

The 26-year-old from Seoul has been on a hot streak in the past month, winning two titles in October to go alongside wins in Portland in September and Texas in July.

Ko said the death of her grandmother in March had inspired her winning streak.

“After she passed away I was thinking she really wants to see a lot of wins from heaven,” Ko said.

“So I worked hard and I won four tournaments. So she’s going to be happy.” – AFP