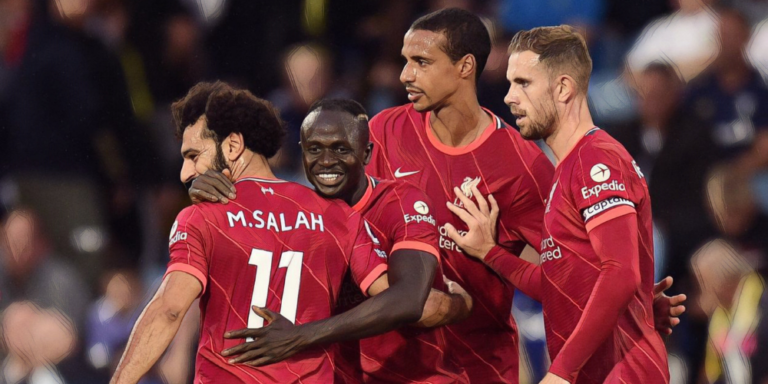 Liverpool host Arsenal at Anfield this weekend, with now just two points separating the two sides in the table despite their contrasting starts.

Here’s all you need to know about Saturday’s crunch clash:

Liverpool remain just four points off leaders Chelsea after an impressive start to the season, although they have failed to win their last two league games, squandering a two-goal lead at home to Brighton, before suffering their first defeat of the season in all competitions away at West Ham United.

That barnstorming 3-2 defeat at the London Stadium saw the Reds undone by an impressive and confident Hammers side, with set-pieces posing a particular problem with two of the hosts three goals coming from corners.

Manager Jurgen Klopp was clearly unimpressed after the match that the opposition’s opener had not been disallowed for a potential foul on goalkeeper Alisson, although the German will perhaps be more concerned with the manner of the other two goals conceded, with Pablo Fornals netting on the counter and Kurt Zouma powering in a header after being left unmarked at the back post.

Five goals conceded from their last two league games is a worrying statistic for the former Borussia Dortmund boss, although he can be encouraged by his side’s recent form against Saturday’s opponents’ Arsenal, having won their last five league meetings at Anfield, scoring at least three times on each occasion.

They will, however, have a number of injury concerns to deal with, namely Roberto Firmino who is out with a hamstring injury he sustained in the win over Atletico Madrid, while Andy Robertson is also a doubt being forced off in Scotland’s win over Denmark on Monday night.

Klopp will be hoping to avoid a repeat of the injury crisis that curtailed their title defence last season, although it is midfield which appears to be a potential issue this time around, the likes of James Milner, Curtis Jones and Naby Keita all doubts, while Jordan Henderson faces a race to be fit after suffering a tight hamstring on international duty.

The Englishman is tipped to be involved, however, while Sadio Mane has returned to training despite picking up an injury while away with Senegal.

What a marvellous turnaround it has been for Arsenal in recent months, with their August form already looking like a distant memory following their current 10-game unbeaten run in all competitions.

Such a positive string of results has propelled the Gunners into fifth –  three points ahead of Manchester United – and just two points behind Saturday’s opponents’ Liverpool, with the chance to leapfrog the Merseysiders despite having failed to pick up a point or score a goal in their opening three league games.

Manager Mikel Arteta had looked among the favourites for the sack in those early weeks of the season, yet is now reaping the rewards of the club’s bold recruitment policy, with all of the young arrivals having made an instant impact, particularly Aaron Ramsdale and Ben White.

After having been hampered by illness and injury amid that tough start, the Spaniard is now seeing the benefits of being able to name a settled side, with that consistency in selection seemingly translating into consistency on the pitch.

It would of course be foolish to count their chickens just yet, with the club only too aware of how quickly momentum can change, although there is a lot to applaud at present, not least recent the form of Emile Smith Rowe who netted for the third successive league game in the 1-0 win over Watford – that form earning him a senior England call-up.

Following that international break, Arteta will be hoping for no fresh injury concerns, with Granit Xhaka and Thomas Partey already sidelined, albeit with the Ghanian in with a chance of making a return this weekend.

While Arsenal edged proceedings on penalties when the two sides met in the Carabao Cup last season, Liverpool did the double over their ‘Big Six’ rivals in the Premier League, adding to their earlier 3-1 win at Anfield with a commanding victory at the Emirates.

Having endured a torrid run of form after the turn of the year, a late revival from the Merseysiders had put them back in contention for a top-four spot, with a win in north London handing them the chance to close the gap on fourth-placed Chelsea to just two points.

As it proved, the visitors were utterly dominant in their quest for a much-needed three points, with the only real surprise the length of time it took to get an opener, Diogo Jota heading in after a fine Trent Alexander-Arnold cross on 62 minutes, before Mo Salah slotted home a second moments later.

The win was well and truly rubber-stamped with less than ten to play as Jota and Alexander-Arnold once again combined, the Portuguese firing in for his second of the game from close range.

Who is the referee?

What channel is Liverpool v Arsenal on?

UK and Irish readers can watch, or stream, the match on Sky Sports Premier League.

What time is kick off?