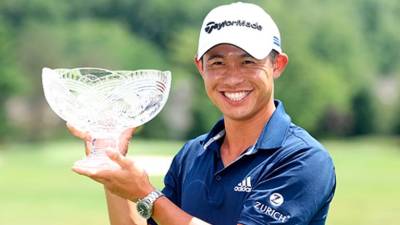 SANDWICH: When Collin Morikawa won the 2020 PGA Championship in his home state of California, pandemic restrictions meant that no spectators were in attendance to celebrate with him.

More than 5,000 miles away, to bookend a stretch of seven majors in 12 months, Morikawa received his due from British fans at the Open Championship as they lauded the emergent American star.

Morikawa’s final-round 66 Sunday wrapped up a 15-under 265 at Royal St. George’s in Sandwich, England, lifting him past South Africa’s Louis Oosthuizen for his second major title.

Morikawa, 24, became the first player in golf history to win his debuts at two different majors and the first player since Bobby Jones in the 1920s to win two majors in eight starts or fewer. As he accepted the Claret Jug, Morikawa called it one of the best moments of his life.

“At 24 years old, it’s so hard to look back at the two short years that I have been a pro and see what I’ve done because I want more,” Morikawa later told reporters. “I enjoy these moments and I love it, and I want to teach myself to embrace it a little more, maybe spend a few extra days and sit back and drink out of this (the Jug).”

Jordan Spieth shot 66 to finish second at 13 under. Oosthuizen (71) and U.S. Open champion Jon Rahm of Spain (66) tied for third at 11 under. South African Dylan Frittelli carded a 68 to take fifth at 9 under, and Brooks Koepka soared up the leaderboard with a 65 to finish T6 at 8 under with Canada’s Mackenzie Hughes (69).

Oosthuizen led the Open after each of the first three rounds, yet failed to convert a major opportunity once again. Earlier this year, he was a 54-hole co-leader at the U.S. Open and finished second after he also took runner-up at the PGA Championship.

Playing in the final pairing, Morikawa opened with six straight pars while Oosthuizen gave a shot back on No. 4 to create a tie for the lead at 11 under. Everything pivoted at No. 7, a reachable par-5 hole where Oosthuizen came undone.

Oosthuizen skulled his third shot out of a greenside bunker, over the green and into a different bunker. His recovery from there wasn’t much better, landing on the green but too far from the hole to have any hope for par. Morikawa, meanwhile, landed a chip shot right next to the hole for a tap-in birdie and a two-shot swing.

That propelled Morikawa forward. He hit a perfect approach at the eighth to set up a birdie, dunked a long birdie putt at No. 9 and saved a mid-range, downhill par putt at No. 10. The run took him to 14 under and established a three-shot lead over Spieth at the time, while Oosthuizen remained stalled at 10 under.

“The seventh hole was definitely the turning point,” Morikawa said. “I was hitting good shots to give myself chances for birdie. But to get a good break off the drive, I thought I pulled it left, hit it up short, was about to putt it, hit it to tap-in range. At that point, I kind of got the round started.

“Saw what happened to Louis. I’m not sure what happened with his first bunker shot, if he had a tough lie or anything, but just to have that little switch of a two-shot swing kind of got that round started and into another gear in a sense.”

Spieth, who wrapped up his third round in frustrating fashion with two poor bogeys, went 2-over for his first six holes Sunday before capitalizing on the seventh with an eagle putt. With momentum on his side, he poured in four birdies between Nos. 9 and 14 to rise to 13 under.

But like a handful of players Sunday, Spieth found his groove a bit too late. Morikawa sank another lengthy birdie putt at No. 14 to reach 15 under, and Spieth missed a birdie chance at No. 17 to keep apace.

“I really felt like I 100% played well enough to win this week,” Spieth said on the Golf Channel broadcast. “I felt that way, and I haven’t felt that way in a major in quite a while. Under pressure, under major championship pressure on the weekend, it felt like my swing held up really nicely and I’m gonna take that as a lot of confidence moving forward for sure.”

Morikawa played his final 31 holes of the championship without a bogey. Oosthuizen, who totaled only three bogeys from Thursday to Saturday, made three bogeys and two birdies Sunday for a disappointing T3 finish.

Rahm nearly holed out an albatross on the par-5 seventh, where his approach rolled and missed the cup by a few inches, leaving him a 5-foot eagle.

Frittelli, overshadowed by bigger names throughout the day, snuck into the top five with two of his five birdies coming at Nos. 15 and 17.

Earlier in the afternoon, Koepka polished off a bogey-free 65 with three birdies and an eagle, a round that could have been lower with some more converted birdies on the home stretch.

Morikawa went 67-64-68 over the first three rounds to set himself up for Sunday. His second-round 64 featured seven birdies that briefly put him in the hunt for a 62, which would have been a course record and tied the single-round record for a major.

Germany’s Matthias Schmid tied for 59th at 2 over and won the Open Championship Silver Medal as the low amateur. -REUTERS