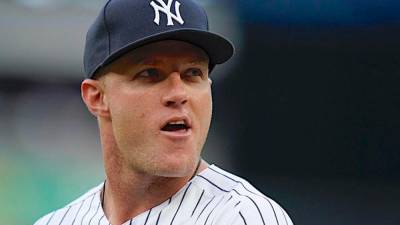 Amburgey pulled up lame after ending the fourth by hitting into a double play. He hunched over and was in pain after reaching first base.

Amburgey joined the Yankees Thursday and made his debut a day later. He was hitting .312 in 38 games at Triple-A Scranton/Wilkes Barre before getting called up.

It marked the second straight game a New York outfielder suffered an injury. In Saturday’s rain-shortened 3-1 win, left fielder Tim LoCastro suffered a torn ACL in his right knee after crashing into the wall in foul territory to catch a ball hit by Alex Verdugo in the first inning.

New York has four outfielders on the injured list, and Aaron Judge is one of six players on the Covid-19 list.

Starting center fielder Aaron Hicks was lost for the season in mid-May with a wrist injury and, earlier this month, Clint Frazier (vertigo) and Miguel Andujar (strained left wrist) landed on the injured list. – Reuters