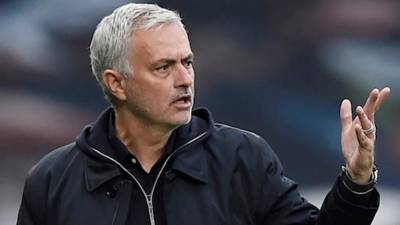 No side in Premier League history has ever come from 3-0 down after the 81st minute.

“This was a game we had in the pocket and we lost two points,” said Mourinho.

“My guys were not strong enough to cope with it psychologically in the last few seconds.”

Spurs raced to a 3-0 lead within 16 minutes as the free-scoring combination of Harry Kane and Son Heung-min looked to have Mourinho’s side cruising towards a win that would have put them second in the table.

“We should remember this feeling forever so it never happens again,” said Son.

“It is just so sad that we lost a big two points, when we as a collective played so well and as a team dominated and controlled the game, to draw the game feels like we lost.”

The opener came inside the opening minute as Kane’s sumptuous long pass in behind the West Ham defence picked out Son and the South Korean cut inside to curl into the far corner.

The roles were reversed for Kane’s first goal as the England captain produced a stunning piece of skill with a nutmeg on his marker before firing low into the bottom corner.

Along with Gareth Bale, Sergio Reguilon made the move from Real Madrid to Tottenham last month and his rampaging runs from left-back are reminiscent of Bale’s early days at Spurs before the Welshman pushed further up the field.

The Spaniard set up Kane’s second with a pinpoint cross for the striker to head home at the far post.

“Kane was incredible today,” said West Ham boss David Moyes. “He was so good. When you see him up close he really is a top player.”

Only a fine save from Lukasz Fabianski prevented Son also registering a double in a blistering opening quarter from Spurs.

Mourinho lauded Tottenham chairman Daniel Levy as a “genius” for the deals he made in the transfer market to give his manager a depth of squad capable of challenging for trophies.

Bale is the box office new addition and was handed his second Spurs debut as a second-half substitute.

He showed no lack of confidence by striking a freekick with his first touch but the ball flew straight into Fabianski’s grasp.

Kane came within inches of sealing his hattrick with a shot from outside the box that hit the post, but Tottenham’s defensive deficiencies saw a comfortable afternoon completely unravel.

Balbuena’s header from Aaron Creswell’s freekick started the collapse before Sanchez turned a dangerous ball across the box into his own net.

Bale should have sealed the three points and a dream debut but he flashed a shot wide with just Fabianski to beat as the game entered stoppage time.

And that would come back to haunt Mourinho’s men when a Cresswell freekick was only cleared to the edge of the box and Lanzini arrowed an unstoppable shot high past Hugo Lloris.

“Tonight was a really proud moment to be manager of the team,” added Moyes, who was making his return to the touchline after missing two games due to coronavirus. “They never gave in, they kept going, it’s a big result.”

A point leaves Tottenham five points off table-toppers Everton in sixth with West Ham a point further back in eighth. – AFP