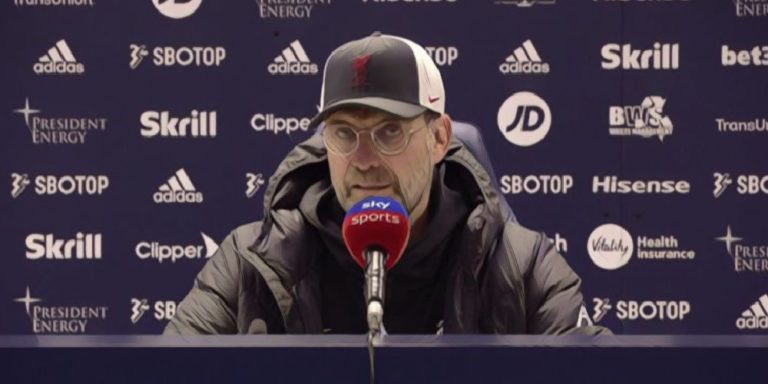 Jurgen Klopp insists he understands the anger of supporters over the European Super League proposals and says he’s even more determined not to resign as Liverpool manager.

Liverpool are amongst the leading names behind proposals for a breakaway competition, with each of the Premier League’s ‘big six’ having agreed to the formation of a European Super League that threatens the existence of the Champions League and domestic divisions.

The plans have been met with huge criticism and opposition, several leading football authorities – including the Premier League, FA and UEFA – against the concept of a competition that will effectively served as a closed-shop for Europe’s wealthiest clubs.

Liverpool fans have shown their anger at the Reds’ involvement with protests outside of Anfield, whilst supporters have also removed banners from the Kop in a demonstration of their view on the proposed competition.

Klopp – who revealed he was against the idea of a European Super League before Liverpool’s 1-1 draw with Leeds on Monday night – insists he understands the fans’ anger but has refuted suggestions he will resign from his position as a result of the plans.

The German says now more than ever he is determined to remain in charge of the club and help the supporters through a ‘tough’ period which threatens the sport as we know it.

“I understand the fans are angry, absolutely, that is not my problem,” Klopp said at his post-match press conference. “My problem is the banners are there for the team and that is why I would leave them there.

“If Klopp left, Liverpool fans would have those owners out within a week. They would tear that stadium down. Those owners will not know what has hit them if Klopp leaves. That man is the most powerful man at Liverpool Football Club.”@Carra23 on Jurgen Klopp & the ESL pic.twitter.com/wXSw4Md2EW

“I am not sure if I am more exposed than ever, because the English system is like this, there is only one voice in the club and that is the manager. It’s different to German and I had a lot of time to get used to it, it’s not new.

“But there will be a moment for sure when our owners say what they have to say, definitely, I am sure.

“I am 20 something years in football and a lot of times in Germany we have CEOs and presidents and owners make decisions without asking me.

“I am used to dealing with that, usually. I don’t want to be involved in these kinds of things, I don’t understand them. I am a football person, how I said. It’s not about letting me down.

“What I say is I am here as a football coach and a manager. I will do that as long as people let me do that, that is how it is.

“It is not the situation. I heard today that I will resign or whatever. The times get even tougher, that makes me stick here even more, so I feel responsible for the team, for the club and for the relationship we have with our fans.

“It is a very tough time for sure but I will try to help them to sort this somehow.”

Read – The European Super League and the Future of Football

The post Klopp insists he understands fans’ anger at ESL and says he’s even more determined not to resign first appeared on The Football Faithful.