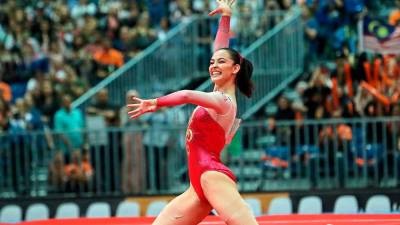 With less than a week to go before Farah Ann springs into action in her Olympics debut in Tokyo, Shu Wai admitted that the gymnast is still struggling to find her footing on the balance beam.

“Farah Ann’s fate in Tokyo Olympics hangs on the balance beam. I just hope that she won’t make a big mistake in that apparatus,” he told Bernama when contacted.

Apart from the balance beam, the 27-year-old athlete is also required to compete in the vault, uneven bars and floor exercise in the all-around event.

Shu Wai also feels that his charge is like a cat on hot bricks to take on the challenge in the world’s biggest multi-sports event in Japan.

“This is Farah Ann’s biggest event yet and what more, her first competitive event since the 2019 SEA Games in Manila, the Philippines.

“Her face tells a lot that she is a bundle of nerves, but I hope that she will quickly let her hair down and just have fun, plus there’ll be no spectators,” he added.

The former Olympian is also grateful that Farah Ann managed to leave early for Japan as that would help her to adapt to the Games’ atmosphere.

Despite not being able to travel to Japan, Shu Wai is constantly communicating with Farah Ann and is also getting help from another national artistic gymnastics coach, Ukrainian-born Natalya Sinkova, to motivate his charge to dance her way into the hearts of judges.

Although not setting any target for Farah Ann, the 35-year-old coach said he will be happy if the gymnast could score more than 52 points in the event.

Shu Wai believes that will put her in a good position to qualify into the next round.

Farah Ann became the first Malaysian female artistic gymnast to qualify for the Olympics after 20 years when she finished 16th out of 20 in the qualifying session of the individual all-around event at the 2019 World Championships in Stuttgart, Germany.

In doing so, Farah Ann became only the third Malaysian gymnast to qualify for the Olympics, after Au Li Yen in 2000 (Sydney) and Shu Wai in 2004 (Athens).

Besides Farah Ann, another gymnast, Jeremiah Loo Phay Xing, will also be making his debut in the Olympics after qualifying for the men’s all-around event last month.

According to the Malaysian Gymnastics Federation, Jeremiah’s success in qualifying for Tokyo was based on his results in the 2019 World Championships in Stuttgart.

Artistic gymnastics will be held from July 24-Aug 3 at the Ariake Gymnastics Centre in Tokyo.

The Tokyo Olympics will be held from Friday until Aug 8. -BERNAMA