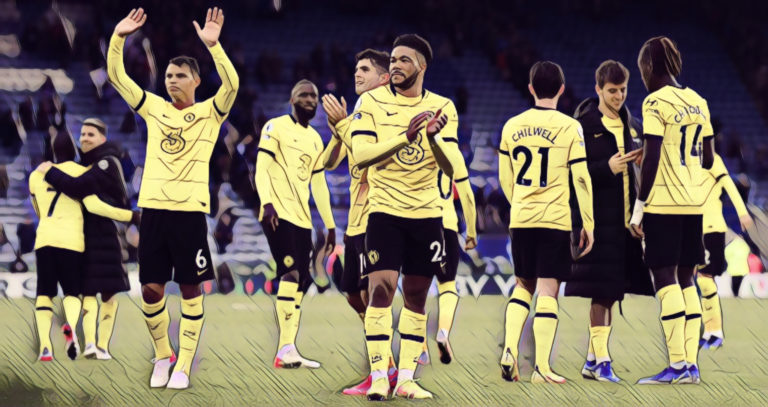 Chelsea exacted FA Cup final revenge as they breezed to a deserved 3-0 win over Leicester City at the King Power Stadium on Saturday.

Having been held by Burnley last time out, the European champions appeared in no mood to drop points again, making a dominant start straight from the off with former Leicester man Ben Chilwell striking the crossbar inside four minutes.

The England international was then involved again as the Blues did make the breakthrough soon after, swinging in a superb delivery from a corner with Antonio Rudiger heading home with relative ease for his second goal of the campaign.

Another former Foxes star N’Golo Kante then saw his effort denied by the onrushing Kasper Schmeichel after a stunning pass from midfield partner Jorginho, before the Frenchman did eventually make it 2-0 after gliding his way up the pitch and unleashing a fierce effort on his left foot.

In truth, the hosts had been second best for much of the half, with the visitors domination continuing after the break as Chilwell went close with a driven effort, before compatriot Callum Hudson-Odoi lashed an effort over the bar after cutting in well off the left flank.

At the other end, Daniel Amartey saw his ambitious long-range effort superbly saved by Edouard Mendy, before Chelsea extended their lead through Christian Pulisic, the USA international latching onto a pullback from fellow substitute Hakim Ziyech to prod home at the end of an excellent team move.

The visitors then saw strikes from Pulisic, Hudson-Odoi and Reece James all correctly ruled out for offside, as Thomas Tuchel’s men coasted to a commanding victory to move six points clear at the top of the table.

Speaking after that resounding result, the German was unsurprisingly delighted with his side’s performance, despite admitting that they ‘could have created more chances’.

”We created a lot of half chances, we were a bit unlucky with offsides but I am happy if we create. We need to be strong from first to last minute, it was a deserved win.

“Very good first half, we struggled with decisions and precision in the last third and could have created more chances. At two goals, anything can happen and the stadium can wake up but we did not allow them into the game and finished them off.”

The game also saw centre-back Rudiger once again impress in both boxes, with Tuchel admitting that the club are keen for him to stay with less than a year remaining on his existing deal.

“Everybody wants him to stay, sometimes there is a delay in these things but I know he knows he plays for a fantastic club in a fantastic league so we need a bit of patience.

“Ngolo [Kante] is outstanding, he finds another gear on the pitch, when he plays with a free mind he can be the difference.

“We want to push over and over again, I am happy with the way we played and the result.”

Chelsea are back in action at home to Juventus in the Champions League on Tuesday, before taking on Manchester United in the Premier League on Sunday.