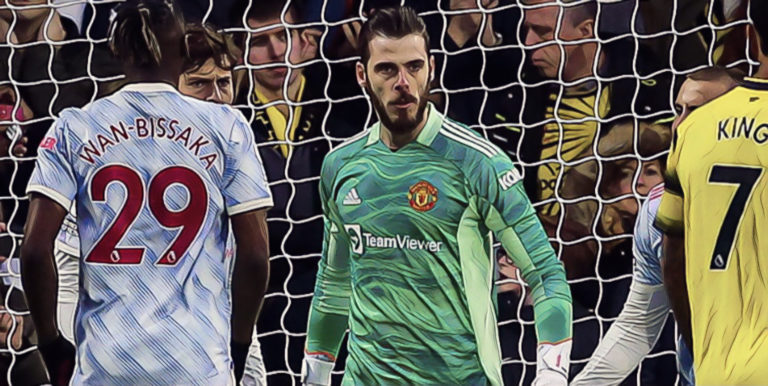 Manchester United’s misery continued as Watford piled the pressure on Ole Gunnar Solskjaer with a brutal 4-1 thrashing at Vicarage Road on Saturday.

It’s never dull with this United side, as a frantic opening saw the hosts awarded a penalty following a foul on Josh King by Scott McTominay, after Bruno Fernandes’ errant slice had put the striker through on goal.

Fortunately for the visitors, David De Gea was on hand to spare their blushes, twice denying Ismaila Sarr from the penalty spot. The winger’s initial spot-kick had been forced to be retaken after a VAR review showed Kiko Femenia – who had lashed home on the rebound – had encroached into the area.

Unperturbed by that setback, the relentless Hornets continued to dominate proceedings and were eventually rewarded for their rampant start with a goal just before the half-hour mark, the lively King prodding home from Emmanuel Dennis’ pull back.

The former Bournemouth striker then saw his header beaten away by De Gea, before Sarr atoned for his earlier penalty error by firing in from the angle to heap even more misery on Ole Gunnar Solskjaer.

Needing to roll the dice at half-time, the Norwegian introduced Anthony Martial and Donny Van de Beek for the second period, the Dutchman quickly making his mark on a rare outing with a well-taken header to pull a goal back, before teeing up Cristiano Ronaldo who saw his effort tipped over by former United teammate Ben Foster.

When it rains it pours for the Red Devils at the moment, however, as Harry Maguire was dismissed for a second yellow card after dallying on the ball and bringing down Tom Cleverley, albeit with the visitors still posing a threat with ten men as Ronaldo headed over.

Bruno Fernandes also lashed over before Claudio Ranieri’s men made sure of the points with two late strikes, first substitute Joao Pedro lashed in from the angle, before an almost replica effort saw Dennis make it 4-1.

That dismal defeat ensures it is a run of four losses from their last five league games, while they’ve only won once in the top-flight in their last seven, with the long-serving De Gea admitting that the team are in a ‘difficult moment’ after an ’embarrassing’ display.

“There’s not much to say – it was embarrassing to see Man United play like we did today. It’s not acceptable – the way we were playing and doing things,” De Gea told BBC Sport.

”It’s easy to blame the manager or the staff but sometimes it’s the players. We need to show much more than we are doing.

“Embarrassing first half – we could’ve conceded four goals in 45 minutes. It was hard to watch the team playing today – it was nightmare after nightmare. It’s not acceptable.

Ole Gunnar Solskjær holds his hands up to the away Manchester United fans after they’re thrashed 4-1 at Watford pic.twitter.com/pTzaPHjh2l

“We are trying to give our best and fight for the team but for sure something is very wrong. You can see in the games – it’s very low level, very poor. Sorry to the fans, once again.

“This is not Manchester United or the way we ought to play – it’s difficult to say more than that.

“It’s been very bad for a long time – a club like Man United we have to be fighting for trophies and fighting for big things and to be honest we are far from that. Let’s see – we have to keep working hard and stick together. We always say the same things but it’s the truth – we have to look at ourselves and see where we can improve.”

Manchester United have little time to dwell on that shambolic defeat with a trip to Villarreal to come on Tuesday, before a huge meeting against Chelsea on Sunday.

The post ‘It was embarrassing’ – De Gea reacts to Man United’s ‘unacceptable’ 4-1 loss to Watford first appeared on The Football Faithful.