Chelsea moved six points clear at the top of the Premier League with a controlling 3-0 win over Leicester at the King Power Stadium.

Chelsea started better and took a deserved lead after 14 minutes through Antonio Rudiger’s header from a corner.

Despite Leicester then having a dangerous spell, N’Golo Kante drove forward the other way and made it 2-0.

In the second period, the Foxes improved and they had chances, but they could not find a way through. Instead, Hakim Ziyech and Christian Pulisic combined for 3-0. They could have had even more, had the offside flag not gone up a number of times.

As for who stood out, Thiago Silva had a fantastic influence. Not only did he defend well, but his passing was brilliant as he helped Chelsea control the game in the second half.

For Leicester, midfield duo Boubakary Soumare and Wilfred Ndidi got overrun, which did not help the likes of Jamie Vardy and Ademola Lookman get into the game.

Kasper Schmeichel: Could do little for Rudiger’s opener or Kante’s goal. Punched and blocked away when the ball came into his box, but gave the ball away cheaply with his feet. Made a great save from Chilwell in the second half. 4/10.

Daniel Amartey: His mixed first half saw him make a few interceptions but also give the ball away and make fouls. Forced Edouard Mendy into a fantastic save with a long-range shot. 3.

Jonny Evans: Had his work cut out in the opening 45 minutes and ended the half with a yellow card after bringing Havertz down. 3.

Caglar Soyuncu: Struggled to stabilise Leicester‘s defence when it mattered as the Foxes went 2-0 down before the break. Could not do much better in the second half. 3.

Timothy Castagne: Got outdone by Rudiger’s movement for 1-0 and had a tough time against Reece James down the flank. Showed some desire early in the second half to press the ball, but that waned. 4. 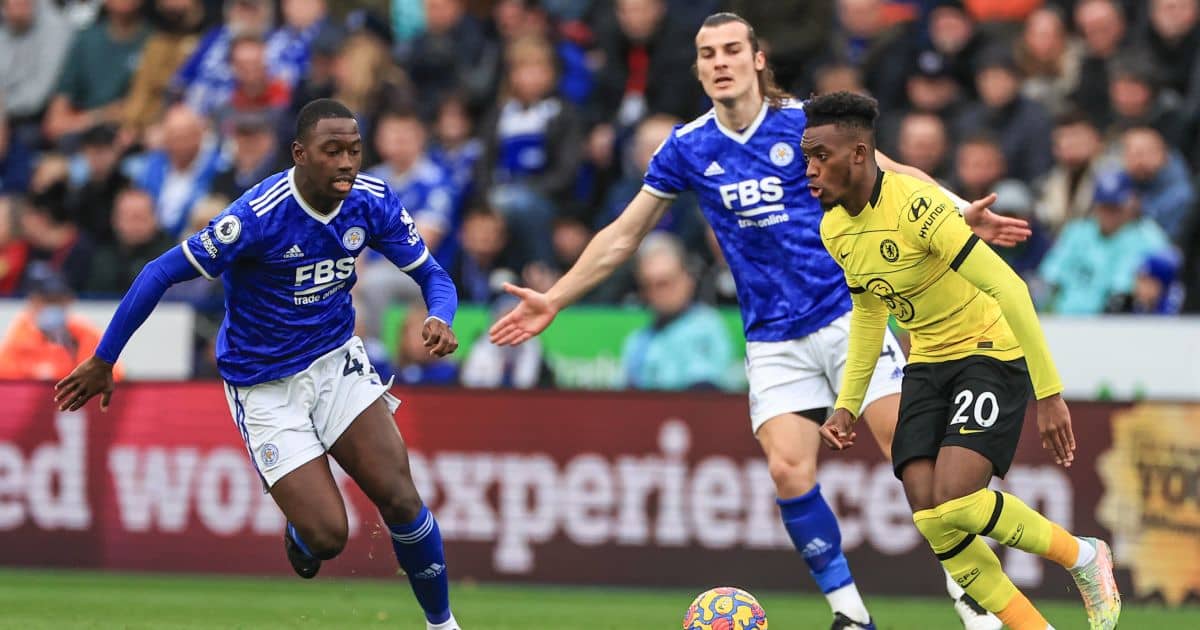 Boubakary Soumare: Got outrun in midfield as Chelsea dominated and he struggled to get on the ball. Could have done more to tackle Kante as he made his goalscoring run. 4.

Wilfred Ndidi: Like Castagne, he did not get tight enough to Rudiger for the opening goal and he struggled to get the ball in midfield. 4.

Marc Albrighton: Got his body position wrong which allowed Chilwell in for an early chance and he struggled to affect the game offensively throughout. 4.

Ademola Lookman: Had a goal ruled out after 24 minutes for offside, following good movement and a fine finish. Looked sharp in the rare moments he got on the attack. 5.

Jamie Vardy: Quiet in the first 20 minutes as Chelsea dominated and only enjoyed a brief five minutes in the first half to get forward. Much better in the second half – as Leicester were at times – and he headed over the bar. 5.

Harvey Barnes: Did his best to help Leicester get forward in the first half, but struggled without many opportunities and came off at the interval. 3.

James Maddison (on for Barnes, 46): His ball set Vardy’s header up as he made an impact after coming off the bench. 4.

Kelechi Iheanacho (on for Lookman, 46): Showed good desire to instil some attacking verve into Leicester, but ultimately to no avail. 4.

Kiernan Dewsbury-Hall (on for Soumare, 75): Got on the ball a few times but could not do much to affect the scoreline, coming on with his side 3-0 down. 3.

Edouard Mendy: Completely unused in the first half and was not needed even in Leicester’s best five-minute spell. Made his first save straight after the break and followed that up to tip Amartey’s effort over. 7/10.

Trevoh Chalobah: Barely involved in a defensive manner but played a few nice passes forward in the opening battles. Enjoyed getting forward and supplying attacks in the second half, as well as mucking in defensively. 7.

Thiago Silva: Made a crucial block to prevent Vardy getting in and tracked back well to stop him again in a rare one-on-one battle. In the second half, his passing and control was masterful as he continued to chip in at the back. 9 – Man of the Match.

Antonio Rudiger: Classy passing and control in the first 10 minutes before fine movement which allowed a nice glanced header for the opener. Will be happy with another clean sheet. 8.

Reece James: Had a cross palmed away by Schmeichel after seven minutes, before his fantastic turn and pass set Kante up for 2-0. In the second half, he went on a great run through midfield and enjoyed such freedoms. 8. 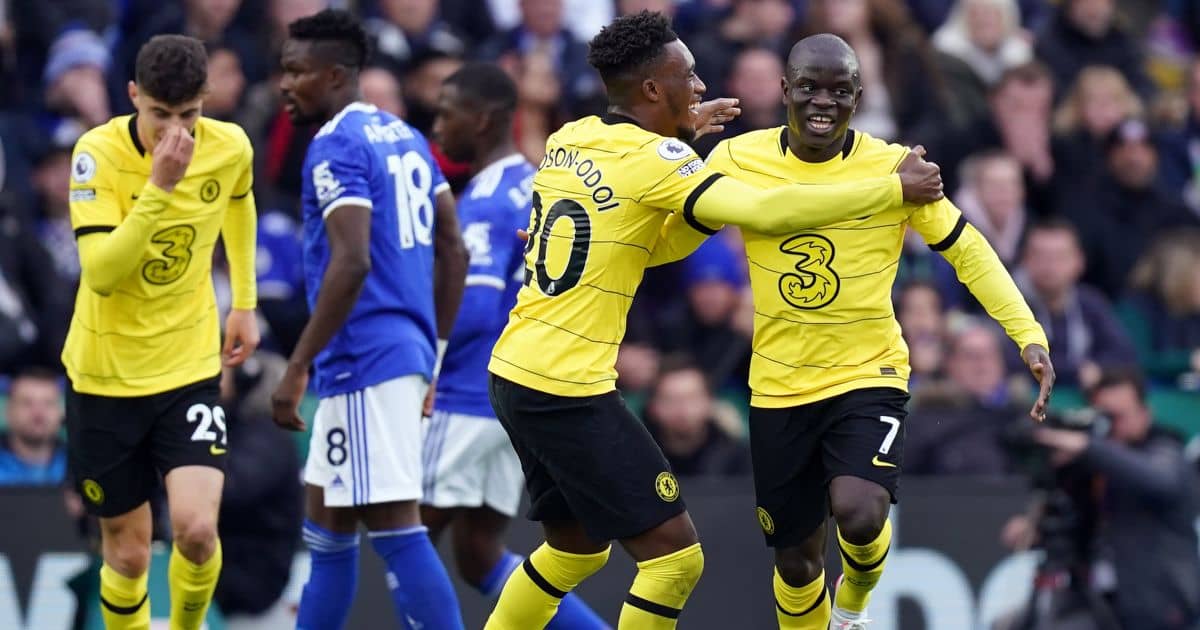 N’Golo Kante: Chelsea’s best player in the first half. Playing box to box, he had three chances to score – netting one – and kept Chelsea steady with crucial interceptions. Continued in that manner after the break. 9.

Jorginho: Calm and composed, as ever, in the Blues’ midfield, before coming off with an injury concern. 8.

Ben Chilwell: Hit the bar four minutes in before getting the assist for Rudiger’s opening goal from a well-placed corner. Overall, continued his impressive form of late. 8.

Mason Mount: Struggled to find his passing range early on, but settled with touches including a nice turn round a Leicester player and a pass forward. Fired a free-kick over the bar. 7.

Callum Hudson-Odoi: Dangerous down the flank, cutting inside but also going outside. Impressive in the second 45 minutes and involved in plenty of attacks. 8.

Kai Havertz: Had a mixed first half. Should have passed out wide to James instead of shooting in a big chance. However, he held up the ball well before winning a foul on the edge of the area. Played his part in Chelsea’s overall dominance. 7.

Christian Pulisic (on for Havertz, 62): Scored 10 minutes after coming on, reacting well to stretch and flick an effort home. 8.

Hakim Ziyech (on for Mount, 63): Got the assist for Pulisic’s goal and gained vital rhythm, which Blues boss Thomas Tuchel outlined before the match as his key task. 8.

Ruben Loftus-Cheek (on for Jorginho, 77): Kept Chelsea solid in the final 15 minutes or so.