Ramsdale admits Arsenal were ‘naive’ after 4-0 defeat at Liverpool

Ramsdale admits Arsenal were ‘naive’ after 4-0 defeat at Liverpool 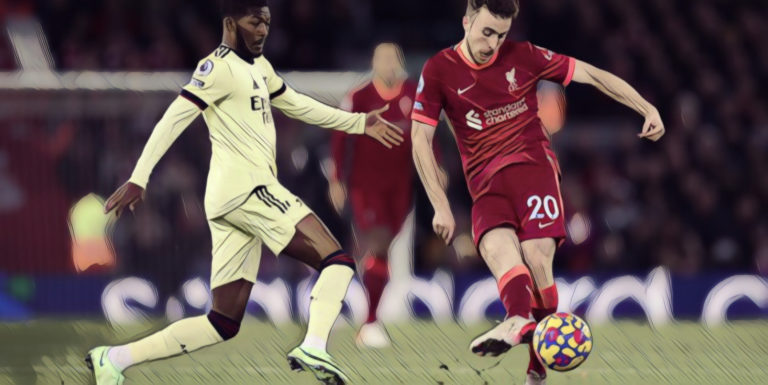 Arsenal’s unbeaten run came to an end in spectacular fashion as they suffered another bruising encounter at Anfield, with Liverpool running out comfortable 4-0 winners on Saturday evening.

The hosts had largely dominated proceedings in a hard-fought opening that had been devoid of any real goalmouth action, before a touchline spat between the two manager’s seemingly lifted the atmosphere and truly sparked the game into life.

The away side then had in-form goalkeeper Aaron Ramsdale to thank for initially keeping the opposition at bay, the Englishman’s quick reflexes keeping out Mo Salah – having earlier denied Sadio Mane in a similar manner – before tipping over from Trent Alexander-Arnold’s effort.

Ramsdale may, however, be disappointed by his role in the eventual Liverpool opener, the summer signing failing to keep the ball out from Mane’s backpost header, after a typically inviting set-piece from that man Alexander-Arnold.

It was a similar story after the interval as Alex Oxlade-Chamberlain saw an effort slide agonisingly wide of the post, before Diogo Jota continued his fine form against Arsenal after capitalising on a Nuno Tavares error, showing remarkable composure to weaves his way past both Gabriel and Ramsdale.

The heavily involved stopper then did well to deny the Portuguese a second, while at the other end the much quieter Alisson reacted well to keep Pierre-Emerick Aubameyang’s strike from the angle.

A blistering break saw Salah tee up teammate Jota with an exquisite pass, although yet again the hosts were denied by the opposition ‘keeper, before the Egyptian international eventually bagged his side’s third after tapping in at the backpost from Mane’s pullback.

Substitute Takumi Minamino made an instant impact off the bench to make it four with a simple finish from another Alexander-Arnold assist, as the Gunners slipped to a first defeat since the end of August with their ten-game unbeaten run in all competitions coming to an end.

“There’s no disgrace in that for a young team going to one of the best teams around at the moment.”

Graeme Souness says Arsenal can be pleased about their form recently and the defeat to Liverpool won’t change that pic.twitter.com/Rl1eELbcWS

Following that disappointing display, Ramsdale admitted that his side were disappointed by their ‘naive’ performance in the second-half, as they were ruthlessly torn apart by the hosts.

“It’s one of the toughest places if not the toughest to come. We did well for the first 45 minutes, they might’ve had more of the ball but we contained them,” Ramsdale told Sky Sports.

”Second-half showed we have got a lot improvement to come, we made mistakes but that’s life and football. We got punished and that’s what the top teams do.

“For all their possession, I know I’ll have to make saves and becomes that’s part and parcel I felt we were doing well, a goal from a set-piece which we have been doing well at. At the start of the second we were a bit naive and we needed to make better decisions on the pitch.”

There was a feeling that the former Bournemouth stopper could have perhaps done better to keep out Mane’s opener, with the 23-year-old admitting himself that he may have been at fault.

“I’ve not seen it back. It’s a very good header into the ground on a wet surface but I think I could do better. I pride myself on high standards and it’s one I need to look at and possibly improve in the future.”

Arsenal are next in action at home to Newcastle United on Saturday.

The post Ramsdale admits Arsenal were ‘naive’ after 4-0 defeat at Liverpool first appeared on The Football Faithful.

PREMIER – Daniel Agger on Gerrard’s move: Villa is a good step for him