In economics, the law of diminishing marginal utility holds a great place in everyday life. It states that when you begin having too much of one thing, the satisfaction derived from it starts decreasing with time. Like Manchester United and their relationship with Ole Gunnar Solskjaer. Having given their former player a three-year extension in March, the club has now parted ways after a string of disastrous results.

Though his reign remained trophyless, there have been several highs along with quite a few lows since Solskjaer assumed charge in October 2018. FootTheBall looks at the most memorable and disastrous moments that Manchester United encountered.

A THUMPING WIN ON DEBUT

Having been appointed in mid-October and coming on the back of a demoralizing loss at Liverpool, the first game was always going to be crucial. No matter the opposition but it was another wrinkle, given Cardiff City were Solskjaer’s former club in England. Away to the Bluebirds, United got off to the perfect start as Marcus Rashford opened the scoring in the third minute.

A five-star performance from #MUFC sees us take all three points at Cardiff! #CARMUN pic.twitter.com/LzWuSwNbS5

They would go on to add a further four goals, including a double from Jesse Lingard which would mark off the Solskjaer era in some style. The win would also spark off a six-game winning run when things were really looking bright for everyone.

THAT NIGHT IN PARIS

One of Solskjaer and United’s most famous European nights. Old Trafford had witnessed a 2-0 humbling at the hands of PSG in the round-of-16, who would have been feeling pretty good about progressing. Well, the Red Devils certainly had other intentions as they raced off the block, scoring twice within 30 minutes. However, the Parisians had a goal of their own in between through Juan Bernat, leaving United needing one more at least. They huffed and puffed for most parts of the game, and just when it looked like it was not to be their night, it suddenly became.

On this day, two years ago, Manchester United made THAT comeback against PSG. Winning 3-1 at the Parc des Princes after falling to a 2-0 defeat in the first leg.

Diogo Dalot’s shot was deflected behind by Presnel Kimpembe, seemingly off his arm and shoulder. The referee, after consulting the pitchside monitor, pointed to the spot. Up stepped Marcus Rashford, with the coolest head and kick, sent United to the quarter-finals. Furthermore, it became the first time that a team had overturned a 2-0 home deficit to progress ever in the Champions League.

New season, first game, at home and against Chelsea. It does not get much bigger to begin with and Solskjaer had the perfect aces up his sleeve. Rashford, so often his go to player, got things going with a penalty within 20 minutes and it was all United from there. Anthony Martial scored past the hour mark, Rashford bagged another and Dan James with the final flourish in the final minutes.

Manchester United’s 4-0 win against Chelsea is their biggest ever win against the Blues in the Premier League.

Ole Gunnar Solskjær wins the battle of the legends by some distance. pic.twitter.com/4zZE18YcOl

It was an emphatic statement of the seemingly title charge that was to come but never materialized. Nevertheless, the Red Devils would play some of their best football over the course of the campaign including some mighty wins.

Peter Drury’s words are prophetic more often than not and this came on the back of a sensational evening. Solskjaer’s men had already beaten Manchester City in the reverse fixture at the Etihad. However, many would have predicted that United would go on to complete the double over their city rivals but football…bloody hell. Martial, enjoying his best run in front of goal in England, opening the scoring at the half hour mark. Still, a goal from the Cityzens felt inevitable given their riches but the Red Devils defended stoically and were aided by David De Gea’s supreme form in goal.

With the game in the final minute of injury time and City desperate, the final nail in the blue coffin arrived. Ederson’s rushed clearance fell to Scott McTominay who found the empty net from just past the centre circle to cap off an absorbing afternoon inside Old Trafford.

United’s biggest win since 1955 and their most resounding in what seems like forever. Yes, it came against nine-men Southampton but a 9-0 victory is celebrated regardless of opponents or occasion. Seven different scorers with Martial netting twice and an own goal underlined the overall dominance of the Red Devils.

Rashford, Edinson Cavani, and even Aaron Wan-Bissaka got on the score sheet with United eventually going to finish as runners-up. Of course there were other victories against better opponents and historic rivals which mattered more for the sentiments, but this demolition job remains the most emphatic point of Solskjaer’s Premier League era.

Solskjaer’s final five games during the 2018-19 season saw just two points coming in. The three defeats during that period started off at Goodison Park, with Everton inflicting a crushing 4-0 defeat. United were on the back foot right from the off, with Richarlison and Gylfi Sigurdsson scoring in the first half. 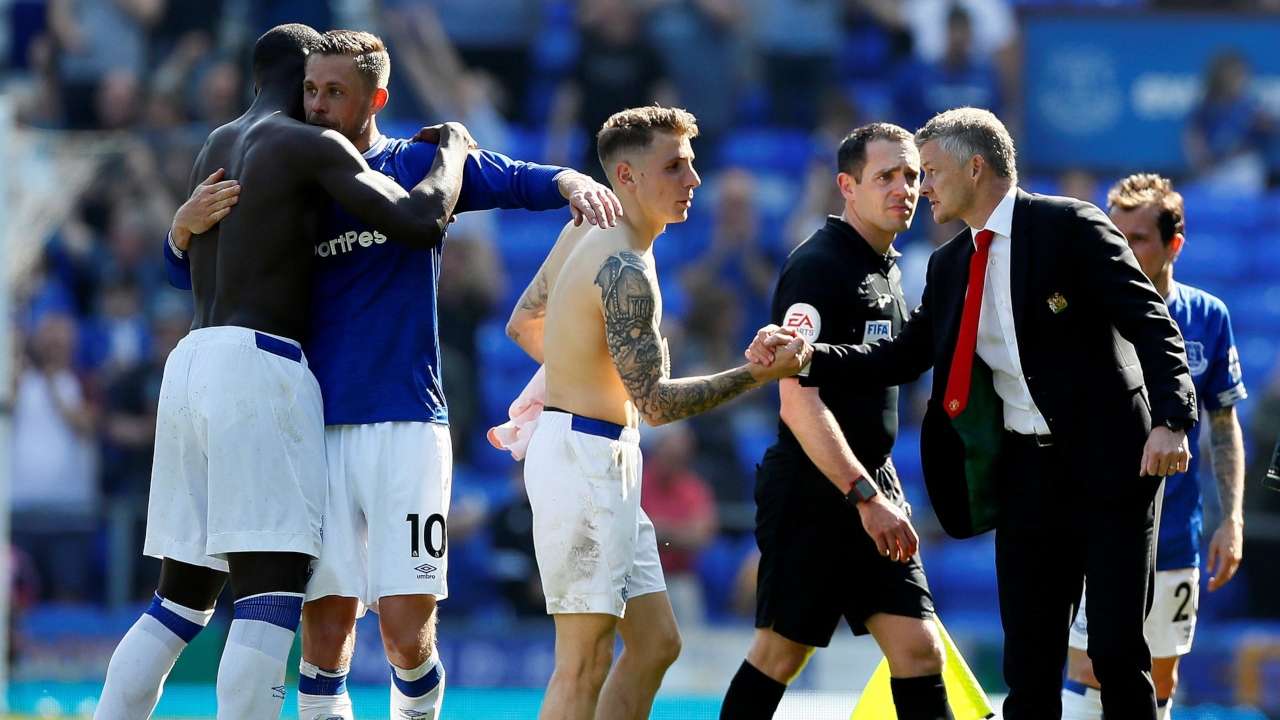 Once again, the heroics of De Gea had kept the scoreline down for large parts of the game but the second half saw more of the same. Lucas Digne and then former Arsenal man Theo Walcott found the net in what was the beginning of a humbling stretch of results for United. They would have gone level on points with third-placed Spurs if they had won but the Solskjaer and co. had to eventually settle for sixth-place.

Playing at Old Trafford against your former coach with a Bruno Fernandes penalty putting you 1-0 within the first minute. What could go wrong? Well, everything. Spurs turned the game on its head with a double strike in the next six minutes. Just when United were looking to settle down, Martial was sent off just before the half-hour mark for a needless altercation with Erik Lamela.

Also Man Utd have lost their opening 2⃣ home league games of the season for the first time since 1986 under Ron Atkinson. Only 5th time it has happened in the club’s history pic.twitter.com/52q6yC7j4i

Harry Kane made it 3-1 just a couple of minutes later before Heung-Min Son added his second of the afternoon before halftime. Serge Aurier and Kane again found the goals in the second half to complete the misery for Solskjaer. It remains his biggest defeat as United’s manager though there have been several close calls in the current season.

One of the worst Champions League campaigns in United’s history, and Solskjaer’s record in Europe never got going to be honest. The Red Devils had already suffered an embarrassing 2-1 away loss to Istanbul Basaksehir before also going down in their penultimate game to PSG. That was still not the end of the world, with United just needing a draw against RB Leipzig in Germany. Instead, they found themselves 2-0 down at halftime and 3-0 after 70 minutes.

Paul Merson says Ole Gunnar Solskjaer ‘got it horribly wrong’ as Manchester United were knocked out of the Champions League after losing 3-2 to RB Leipzig. pic.twitter.com/e79ebBibqy

The defence was getting exposed far too easily and it could have been even more. Two quickfire goals from Fernandes and Paul Pogba after 80 minutes stirred the whispers of another famous comeback but it was not to be this time. United dropped down to the Europa League, where they would go all the way to the final and…well, everyone knows what happened.

The current season started off with so much expectations and hope, with United justifying the hype over the first five games which racked up 13 points. The first speed bump came in the loss to Aston Villa, followed by an insipid 1-1 draw against Everton. The main course was still left for those hopeful of better times. Liverpool came to Old Trafford and United served up a doozy.

“It’s the darkest day I’ve had leading these players.”

A 5-0 defeat with Solskjaer’s men barely putting up a fight. Defensive mistakes, toothless attack, and no midfield protection combined to inflict one of the most damaging defeats in recent times. The players all spoke about needing to do better and wanting to improve but it never came as the final act of Solskjaer proved.

The international break was supposed to help United to refocus and reassess in order to overturn the recent horror run. Solskjaer knew the pressure was getting more and more intense but what transpired was straight out of a nightmare. The Red Devils never got going, even after David De Gea saved a penalty…twice! Former player Joshua King scored the game’s first goal and there was no looking back for Watford.

Ismaila Sarr atoned for his errors and though Donny van de Beek halved the deficit early on in the second half, the misery was never ending. Harry Maguire was sent off for two needless challenges and the floodgates opened in injury time. Two goals in two minutes to kill the game off and with it a whole lot of other things as it stands.