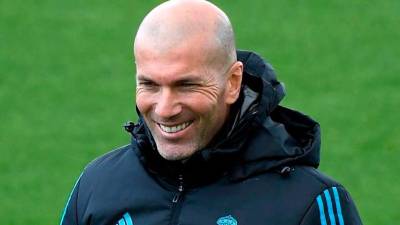 MADRID: With Zinedine Zidane (pix) facing his third crisis in his second spell with Real Madrid, his players must once again fight for their coach on the pitch when they visit Alaves in La Liga on Saturday, smarting from a shock Cup defeat to tiny Alcoyano.

The 2-1 extra-time defeat on Wednesday to the third division, semi-professional side followed a 2-1 loss to Athletic Bilbao in the Spanish Super Cup and left last year’s La Liga champions with one win in their last five games in all competitions.

Zidane, who knows the pressures of Real as well as anyone, did his best to play down the Alcoyano defeat and insisted it should not be classed as an embarrassment, vowing his side would not lose their heads as a result.

But Spanish media showed no such restraint. “No-one can escape this debacle,” said the front cover of newspaper Marca, while daily AS described it as a “disgrace”, adding Zidane’s status had been affected.

The French coach was in the same position less than two months ago after defeats to Alaves and Shakhtar Donetsk and his players provided the perfect remedy with a winning streak of five matches in the league.

He also faced fierce criticism in September 2019 following a hefty defeat to Paris St Germain but rode out the storm to guide the team to the Spanish title.

Real are second in the standings and trail leaders Atletico Madrid by four points having played two games more than their city rivals, who visit Eibar on Thursday and host Valencia on Sunday. Barcelona visit Elche without a suspended Lionel Messi.

It is not difficult to imagine Real rising again quickly to ease this latest wave of pressure on Zidane, but there is growing criticism of his squad management, especially his lack of faith in younger, less experienced players.

Luka Jovic recently returned to Eintracht Frankfurt after a miserable 18 months under Zidane and in two games has scored as many goals as he did with Real, while Sergio Reguilon, Achraf Hakimi and James Rodriguez have also thrived since being let go.

Midfielder Martin Odegaard, meanwhile, is reported by Spanish media to be seeking a loan move due to scarce first-team opportunities under Zidane.

The coach’s strongest starting 11 can still beat anyone on their day but the gruelling calendar is taking its toll on certain players such as Luka Modric, Toni Kroos, Casemiro and Sergio Ramos, who rarely get a rest.