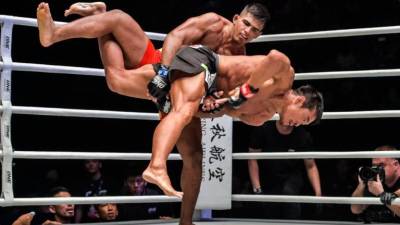 MALAYSIA’S Agilan “Alligator” Thani (pix) felt there was only one way he could take his skills to a greater height, and that was to train alongside World Champions.

The energy at the gym was something new to the Sentul native, but still, he flourished working alongside some of the best athletes in the sport.

“I was in a room filled with World Champions, and the training atmosphere was just crazy,” the ONE Championship star said.

“Despite their levels, they were very humble guys. Everyone there carried the same attitude, and none was better than Aung La N Sang. You can learn a lot from him by just looking at him, the way he speaks and trains.

“To be honest, I was getting beaten up every day, but it wasn’t a frustrating or bad thing for me, because I was happy to get some knowledge from these guys.”

Upon arriving at the gym, the coaches including Henri Hooft did not waste time, immediately taking their latest student on a short tour around the complex before breaking down his greatest attributes in the Circle.

To them it was a straightforward equation – let the “Alligator” work on his strengths, and the weaknesses would take care of themselves.

“They had studied my game plan and already formed a training which I would excel in,” he said.

“They pointed out the good stuff and the bad stuff, and they only wanted me to improve on what I was already good at. They took care of everything, including my training partners and training schedule. It was great.”

Agilan was enjoying the once in a lifetime opportunity until the COVID-19 global pandemic threatened to turn it into a short-lived joy.

His return flight to Malaysia, scheduled for a month later, was canceled, and the airline offered him a replacement flight after only one week in America.

He refused to accept the ticket back home as he had paid for a month’s stay in America. However, during the second week of training, Sanford MMA announced that they would be temporarily closing due to the rapid coronavirus outbreak.

“Thankfully I managed to get another flight on the same night as the announcement, but the whole process was frustrating because I was worried whether I would be able to go home or be forced to extend my stay here [if I didn’t get a ticket],” he said.

“Even though it was only a two-week camp, I believe it will benefit me in the future.”

Download the ONE Super App to keep in touch with Agilan and other world-class athletes in The Home Of Martial Arts.

PSG got in touch with MILINKOVIC-SAVIC’s agent

QUIZ: How well do you know Liverpool FC kits?

Time up for Lacazette? Three possible destinations for the Arsenal striker