England forward Ings and Danish centre-back Vestergaard are doubts for the Boxing Day trip to Fulham, while winger Nathan Redmond is struggling with a hip problem.

Ings, recently back from minor knee surgery, was forced off just before half-time of the 1-0 defeat by Manchester City with a hamstring issue. Meanwhile, Vestergaard has some fluid around his knee and continues to be assessed.

With the Premier League fixtures coming thick and fast, Hasenhuttl knows he has to carefully manage each member of his squad to make sure they can make it through to January.

“It is a little bit early in the week, but we have some issues, definitely,” said Hasenhuttl, who is also missing midfielder Oriol Romeu on Boxing Day through suspension.

“After the very intense last week with three games in six days, you can see that some guys are struggling a little bit.

“I can only tell you who didn’t train so far – that is Ingsy, Jannik Vestergaard, Redmond. Ori is suspended, so we have a few issues.

“Nobody can play a Premier League game without training during the week, so time is running (out) and we will have a look on Friday.

“Stuey (Armstrong) had a problem with his hand, with somebody stepping on it. I think it’s not a problem, but we have a few issues.

“It is what it is, so we must have a look in the next two or three days and otherwise find other solutions, which is why we have a bigger squad.”

Redmond’s hip muscle problem is a hangover from Project Restart and the subsequent lack of a proper pre-season build-up.

Hasenhuttl accepts such issues were always going to crop up given the circumstances.

“We had a very intense game in the last one which was by far the hardest test we have had against Man City, and you could feel that the players were really going to the limits,” the Austrian said.

“For a few players this is not an issue. They are so fit and can handle this, but for others it can immediately cause them muscle problems.

“This is the reason why Ings and Redmond are struggling at the moment.” 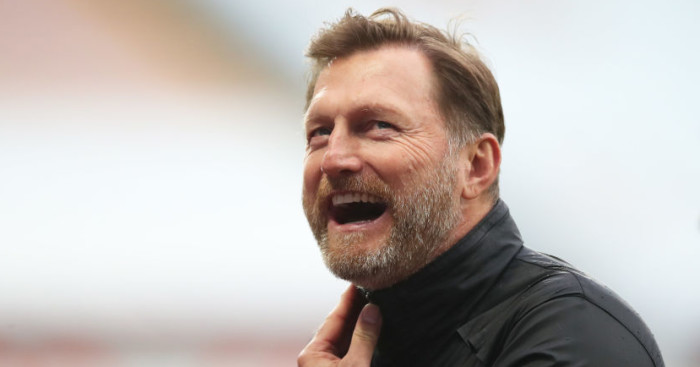 Hasenhuttl, though, understands there is not much anyone can do about the current situation.

“This is our job as a manager – you can never be sure on the weekend, (one moment) everything is perfect and then two days later everything looks completely different,” the Saints boss said.

“When you work with humans this is always possible, suddenly somebody is ill or injured or whatever, you have to change the team completely, but we are not the only team that has to do this.

“You see around the Premier League other clubs are also struggling with some injuries.

“We have to find replacements, this is our job.

“(You can) never be sure that everything is easy and working easy because sometimes in the next moment it can be completely different.”