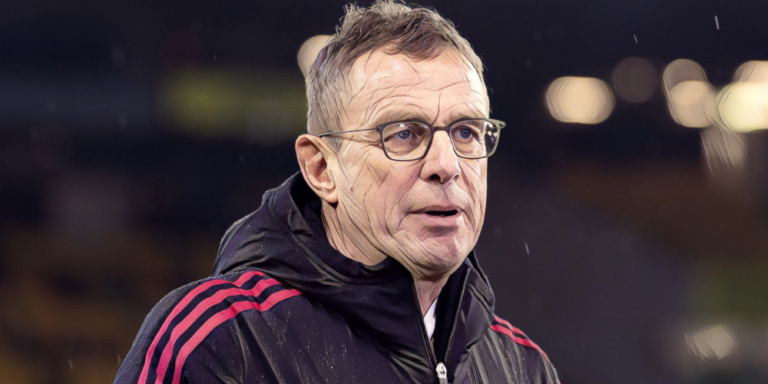 Manchester United interim manager Ralf Rangnick has backed a return of the five substitute ruling in the Premier League and has said there needs to be discussions about the current footballing calendar.

English football briefly permitted the use of five substitutes following Project Restart as players returned to action with a hectic schedule following a three-month hiatus after the onset of the pandemic.

Europe’s leading leagues have since retained the regulation, though the Premier League reverted back to three replacements ahead of the 2020/21 season, despite numerous attempts from the so-called Big Six being rejected.

With positive cases rising and a number of postponements across the division, Manchester United interim boss Rangnick believes the league’s authorities should consider changes once again.

“As far as I remember, it was decided that every team could sub five players when COVID started two years ago, or one-and-a-half years ago,” said the German at his pre-match press conference ahead of the Red Devils’ trip to Newcastle.

“I think it was the right decision to do that, to have more options, to change players, to save energy for players especially if they have only just recovered from COVID.

“As far as I know, in Europe, England is the only country where they only allow three subs, in all the other big leagues in Europe you can substitute five players.

Premier League managers today held a virtual meeting in which player welfare was discussed, and Rangnick was asked about the details of that meeting.

“I think most of the things we have already spoken about, it would be of great help to have five substitutes. This would increase and improve the emotional situation in the squad because it’s a big difference if you can give five players game time – it’s also about game time – and therefore I would be much more in favour of having five subs.

“As I said, in other countries, they do that. I think we should seriously think about that once again. I haven’t spoken with my players about that, but I don’t need to because I know that most of the players would be in favour of that.

“Apart from that, the Premier League will try everything to keep the league safe, to keep the situation around the players safe. At the club, we do that regularly, we have to encourage players to behave in a disciplined way with regards to contact, we also need to make sure we have most of the players vaccinated.

“As far as I’m aware, we have a high record of vaccinated players here in our club, but the past two weeks show that even if you are being vaccinated two or three times, you can still be catching the virus, especially the new virus. You are not being protected [from catching] but at least you are being protected from severe symptoms. And as far as I know, most of our players who were tested positive, at least they had very, very weak symptoms and they didn’t suffer from that.”

“The players are the most important.”

Brendan Rodgers supports the idea of five substitutions in the Premier League pic.twitter.com/KHIhxhL1Pj

This weekend’s fixture will be Rangnick’s first sample of festive football in England, and while he is keen to ‘respect’ the traditional Christmas schedule, he said there needs to be discussions about easing the burden being placed upon players.

“I mean, you know that better than I do, what a big tradition this is to play in England to play Boxing Day, to play on the 27th, even on 30th and 2nd January. This is a big tradition. I think we should stick to it and respect this tradition. I’m looking forward to that, it’s the first time in my coaching career that I will be part of that.

“But I think there might be two or three other issues that can be discussed and have been discussed in the past.

“England is the only country in the top five leagues that plays two cup competitions. Even France, I think they abolished the second one a year or two ago. Currently we are the only country that play two cup competitions; this is something maybe we could once again speak about or discuss. I know the reason for that, the Carabao Cup has been still kept for the third and fourth division teams especially, to help improve the financial situation of those clubs but I still think, if we speak about a tight calendar and playing too many games, this could be something where we could speak and discuss.

“The other issue, I think it has been changed now in the last two weeks, is that in the FA Cup after a draw that you have to have a replay, after a draw. This has been changed now. I think this is also a good idea. In other countries in cup competitions, you play extra-time and penalties so you never have that replay situations. So those might be issues and topics you could speak about.”

The post Rangnick calls for changes to English calendar and return of five sub rule first appeared on The Football Faithful.