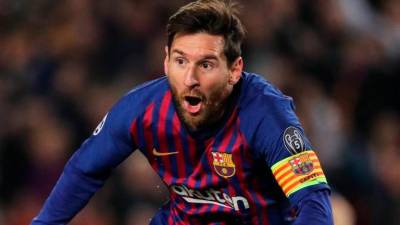 Messi beat Pele’s record of 643 goals for one club when he scored Barcelona’s third goal, and the 644th of his Barca career, in the 3-0 win against Valladolid on Tuesday.

Records are there to be broken, as Messi has proved, but Lineker says this one is untouchable.

“To beat Messi’s 644 goal record, someone will have to score an average of 43 goals a season for 15 years… for one club,” Lineker, now a BBC presenter, tweeted alongside an incredulous icon.

The 33-year-old Argentina star rewrote the history books on Tuesday when he collected Pedri’s neat backheel and struck the ball past goalkeeper Jordi Masip in the 65th minute.

Messi scored his first goal for Barca in 2005. His has beaten the total Pele amassed for Brazilian club Santos from 1956 to 1974.

“When I started playing football I never thought I would break any records. And even less the one I achieved today,” Messi posted on Instagram.

“I can only thank all those who helped me over the years, my teammates, my family, my friends and all those who support me every day.”

Messi’s latest career landmark comes in the wake of his failed pre-season bid to quit Barca after they were thrashed 8-2 by eventual winners Bayern Munich in the Champions League quarterfinals.

That showdown between the club and the six-time Ballon d’Or winner has been put to one side as he continues to excel on the pitch, although he said in an interview this week that he had had a “very bad time” this summer.

“I see Messi happy. He is working hard, and he is a very important part of our attacking game,” said Barca coach Ronald Koeman after Tuesday’s win.

Messi now has his sights on Pele’s record for most international goals by a South American. He has 71 compared to Pele’s 77 for Brazil.

Unlike Pele though, he is yet to win a World Cup. Messi’s Argentina side lost to Germany in the 2014 World Cup final. – AFP