China plans for Beijing Olympic bubble with no holes or hugs

China plans for Beijing Olympic bubble with no holes or hugs 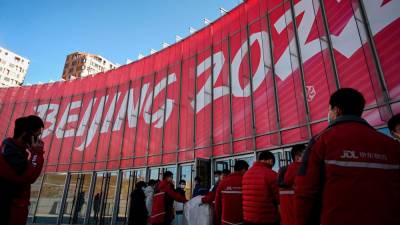 AFP Sport looks at what measures athletes and others can expect to face in the “bubble“ and how that compares to last summer’s virus-delayed Tokyo Games.

China, where the virus emerged towards the end of 2019, has pursued a “zero-Covid” strategy and is taking the same no-nonsense approach to the February 4-20 Olympics.

Organisers hope to limit the spread of infections and keep the Games running smoothly by cocooning almost every person involved in a “closed loop”, effectively a big bubble containing thousands of people.

They will be in there from the moment that they land in the Chinese capital to the time they leave.

That includes for sleeping, eating and travel between the three Games areas, which are as far as 180 kilometres (100 miles) apart.

For example, people in the “closed loop” using high-speed railway between the Olympic zones will be kept in a separate train carriage.

Pretty much everyone. In Tokyo, athletes remained in a bubble but there was more flexibility for others involved in the Games, such as the army of volunteers who are central to any Olympics.

Tokyo was a bubble — but it had holes in it.

But in Beijing, athletes, media, volunteers, cleaners, cooks and coach drivers will all be in the bubble. Organisers have not said how many people that will be, but there will be nearly 3,000 athletes for starters.

Whereas the Tokyo Olympics took place in front of mostly empty arenas, there will be crowds in Beijing, but spectator numbers look likely to be limited.

Fans will not be in the “closed loop” so organisers will somehow need to ensure that they do not mingle with athletes and others inside the bubble.

For people living in China, they will need to quarantine after they exit the bubble.

Unlike Tokyo, everyone must be fully vaccinated or they will have to do 21 days’ quarantine when they touch down in China.

Organisers are not insisting that people have booster shots, but the International Olympic Committee says it is “strongly encouraged”.

Everybody in the bubble will be tested daily for the virus and must wear face masks at all times. In Tokyo that extended to medallists on the podium, although they were allowed to remove their masks briefly for pictures after the medal ceremony. Beijing looks likely to have the same rule.

People have also been told to minimise social interactions “such as hugs, high-fives and handshakes”, the IOC says.

Beijing organisers have made clear that people who do not follow the rules could be kicked out of the Games.

Diplomats in the Chinese capital have told AFP that the bubble looks like it could be so impregnable that they worry they will not be offer to offer proper help to people inside. – AFP