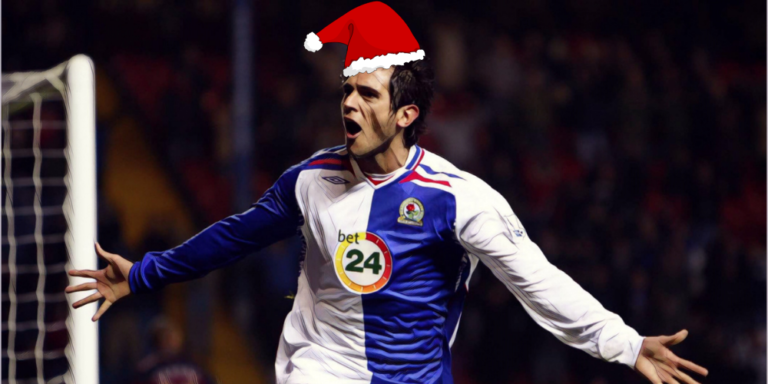 Selecting a festive-sounding Premier League XI is easy, then it quickly becomes hard, as the obvious choices dry up and you resort to puns. That’s a roundabout way of saying there are a couple of players included that may require a leap of faith.

As for picking a balanced side, forget about it. Our team contains no goalkeeper, precisely no defenders and there is barely a midfielder to be seen. The six-yard box will be as crowded as an under-10s game from a corner.

So, goals are a given while at the back, our Christmas eleven will concede and often, but maybe that’s okay. After all, it’s the season of giving.

It’s become the norm to recall the Paraguayan forward as an injury-ravaged disappointment: one of Manchester City’s first major signings post-takeover and one of their worst since.

Yet in his opening campaign for Blackburn the 6ft 4 frontman was exceptional with every facet of his game a strength. He was good in the air. He timed his runs into the box expertly. He had a decidedly silky touch for a big man.

Let’s not forget too, that Santa Cruz won five Bundesliga titles and a Champions League with Bayern.

Now, about those injuries…

Named after an archangel and the son of the big chief, is it any wonder Manchester City fans mutter the Lord’s name when the Brazilian misses yet another straightforward chance?

Jesus was regarded as Sergio Aguero’s successor on arriving to the Premier League and initially set about quickening the Argentine’s demise with a series of goals seeing him tagged as a prolific marksman. As one drought led to another however the boy with the remarkably pronounced cheekbones became a peripheral figure at the Etihad; a stand-in across the front three.

From Jack to Jesus!

Now repositioned on the right, Jesus has resurrected his City career. He’s still not a fan of crosses though.

The exotic name. The generous eyebrows and debonair looks. The hairband and that he came from River Plate, a club that sounds impossibly cool even though they’re anything but. Juan Pablo Angel was the most foreign foreigner who ever joined the gravy train as the Premier League went cosmopolitan and continental in the early 2000s.

The problem was that, despite Angel looking very much like a top striker; who ran like a top striker, and controlled the ball in that suave manner that South Americans do, he never really scored that many goals.

The third best-known Noel but best of the trio – the others obviously being Gallagher and Edmonds – Whelan was an under-valued component of a terrific Coventry side laden with ballers, from Huckerby to Gary Mac, who may not have scaled the heady heights of the top-flight but were exceedingly watchable when securing another mid-table berth.

A subsequent move to Middlesbrough didn’t really pay off for the attacking midfielder, with Whelan even scoring an own-goal against the Sky Blues to cap a disappointing time in the North-East but all told, he remains one of the most under-rated players of his ilk in modern times. For proof of this check out an impressive reel of his best goals here, including a scorcher against Southampton that is still fresh in the mind two decades on.

The story goes that at the tail-end of 2005, a Mancunian wag got in touch with the local newspaper to inform them that the brother of Manchester City’s winger Kiki Musampa was interesting the Blues. A trial had been arranged. He was, by all accounts, a better prospect than the Dutch under 21 international. His name? That would be Kris.

Failing to say the full name out loud, the gullible journalist faithfully reported the transfer link to the amusement of all.

Is this tale apocryphal or true? Who cares? It’s a belter.

Nothing would give us greater pleasure than to open our door over Christmas to a snowy scene featuring the Newcastle bouncer singing his own version of carols. ‘In the bleak mid-winter (because I’m injured again)’ would surely be a favourite, as too ‘Howay the herald angels sing’.

Nothing prepares you for this Andy Carroll #PLMoment

Last seen coming on as a second-half battering ram for Reading, the lumbering striker will chiefly be remembered for calling his son Wolf Nine.

To the best of our knowledge, the attacking midfielder who strangely played most of his games for Southampton at left-back, didn’t have a very shiny nose, nor did he go down in history.

Instead, the Czech star filled in for a bit after Gareth Bale’s departure to Spurs and did an alright job at it, before returning to Slavia Prague from whence he came. A 25-yard thunderbolt against West Brom was the high-point of an otherwise unremarkable stint on the south coast.

Only 12 strikers have bagged more Premier League goals than the former Arsenal and Manchester United hit-man. Arguably only two of them have scored such a wide variety.

The Dutch ace once scored a Boxing Day beauty giving headline writers an open goal and an early escape to the pub.

Who needs Batman when you’ve got Robin?#OnThisDay in 2012, @ManUtd signed van Persie

‘Saint’ Nicolas has given Spurs fans plenty of gifts since moving to the Premier League, namely in the form of banter from being a bit rubbish after costing Arsenal a whopping £72m.

The Gunners winger is a footballing version of Secret Santa in that his performances are mainly anonymous.

Little known fact: A partridge is a bird that will sacrifice its life to save its offspring. Therefore, the partridge in a pear tree from the Twelve Days Of Christmas is used to represent Jesus who did the same for us.

Richie Partridge meanwhile, is a physiotherapist for the Qatar national side who technically never played in the Premier League. He did however make three League Cup appearances for Liverpool at the turn of the century before enjoying a successful loan spell at Coventry.

Okay, so this one is pushing our luck, especially as the thought of the former Wimbledon rascal giving anyone a gift without first two-footing the crib is a stretch.

Read – Where did it all go wrong for sorry Everton?