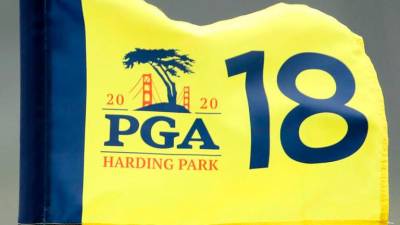 KIAWAH ISLAND: The PGA of America has apologised after spectators overwhelmed security officials and swarmed around Phil Mickelson and Brooks Koepka on the final hole of the PGA Championship at Kiawah Island on Sunday.

When eventual champion Mickelson’s approach shot found the green at the 18th, spectators raced to follow him up the fairway, enveloping him in the crowd and leaving the 50-year-old unnerved by the experience.

Koepka, who is recovering from a dislocated kneecap, said he had been “dinged” a few times in the knee by the crowd.

“While we welcome enthusiastic fan engagement, we regret that a moment of high elation and pent-up emotion by spectators… briefly overwhelmed security and made two players and their caddies feel vulnerable,” PGA CEO Seth Waugh said in a statement.

“We always put player safety at the top of our list and are grateful order was restored. I have spoken to both players and apologised on behalf of the Association.”

Mickelson was shepherded by a few police and marshals and soon emerged into a protected area near the green before Koepka eventually made his way through the crowd. – Reuters