What next for Lille’s title winners? Five players already being eyed by Europe’s elite

What next for Lille’s title winners? Five players already being eyed by Europe’s elite 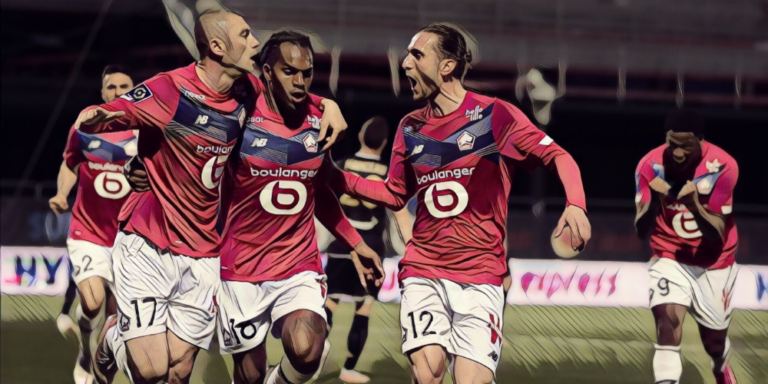 Lille have upset the established order in France to be crowned as champions for the first time in a decade, their final day win over Angers seeing Christophe Galtier’s side pip Paris Saint-German to the title.

It’s an incredible achievement for Lille given the financial resources available to their Parisian rivals, with the newly-crowned champions losing just three games all season to finish narrowly ahead of the capital club.

Just three years ago the club narrowly avoided relegation to the second tier, a late-season revival securing their top-flight status with three wins from their final four games.

Lille’s success has been built on brilliant recruitment with the club having continually unearthed gems before selling them on for huge fees, last season’s departures including Gabriel and Victor Osimhen for a combined sum of more than €90m.

Veteran stars in Jose Fonte and Burak Yilmaz – a revelation since signing on a free transfer from Besiktas last summer – have aided the development of several emerging names, whilst Renato Sanches has thrived following a difficult period at Bayern Munich.

The next challenge will be keeping the core of this title-winning team together, as Lille know better than most that overachieving sides are quickly ridden of their best talent by Europe’s superpowers.

The club’s 2010/11 vintage was one such side, alongside the likes of Porto’s 2004 Champions League winners and the exciting Monaco and Ajax sides that have reached the semi-finals of the same competition in recent years.

We’ve decided to look at five of the key players in their title triumph and assess what could be next for Lille’s talented team.

Mike Maignan already appears the first Lille player heading towards the exit door, the goalkeeper on the verge of signing for AC Milan in a €15m deal.

Maignan is one of several former PSG academy prospects who helped Lille overthrow the reigning champions this season, with the 25-year-old keeping a huge 21 clean sheets – more than any goalkeeper in Europe’s top five leagues – and ranking second amongst all Ligue 1 goalkeepers for save percentage in 2020/21.

Tottenham had previously been linked with the shot-stopper as a replacement for Hugo Lloris, and Maignan could become the long-term successor to Lloris at international level after earning his first cap for France in October.

Signed for just €1m six years ago, Maignan is set to return Lille a significant profit despite having just a year left on his contract and looks set to replace Gianluigi Donnarumma at the San Siro amid uncertainty over the Italian number one’s future.

Sven Botman has attracted interest from the Premier League following a brilliant first season at Lille, the young defender linked with Liverpool, Manchester United and Tottenham in recent months.

Botman was plucked from Ajax in a £6.5m deal last summer before making a senior appearance for the Dutch side, after impressing Lille scouts whilst on loan at Heerenveen.

The 21-year-old missed just one game of Lille’s title-winning Ligue 1 season, forming an excellent partnership alongside the experienced Jose Fonte, with the former Southampton and West Ham defender having said Botman ‘has all the ingredients to succeed at the highest level’.

Having partnered the likes of Virgil van Dijk, Toby Alderweireld, Pepe and Ruben Dias at centre-back, it’s fair to say Fonte is fairly qualified when it comes to assessing the credentials of his emerging teammate.

Boubakary Soumare is another name that has been routinely linked with English clubs in recent months, the promising midfielder having been on the radar of Manchester United after turning down a move to Newcastle last summer.

It now appears that Leicester are leading the chase for the 22-year-old, with the Foxes having reportedly been given a ringing endorsement from France u21 teammate, Wesley Fofana.

Soumare has all the attributes to thrive in the Premier League and has been a major factor in Lille’s success this season, the star powerful, intelligent and comfortable in a box-to-box role.

The youngster’s end product remains in need of improvement, but there is plenty to like about Soumare and he could fit perfectly into an emerging team at the King Power Stadium next season, with Leicester having unearthed some fine talents in recent windows.

The third player on this feature to have been plucked from Paris Saint-Germain’s academy system, Lille have shown the value in handing young players opportunities to develop at senior level.

Ikone has flourished since arriving at the Stade Pierre-Mauroy three years ago, making more than a century of league appearances for the Ligue 1 side and earning four caps for France at senior level.

Perhaps unfortunate to miss out on Les Bleus’ squad for this summer’s European Championship, Ikone has nonetheless impressed scouts across Europe with AC Milan and Borussia Dortmund amongst those reportedly interested this summer.

Dortmund view the 23-year-old winger – who is also comfortable operating centrally – as an ideal replacement for Jadon Sancho if, as expected, the England international leaves the Westfalenstadion.

Ikone scored eight goals and provided seven assists in 53 appearances across all competitions in 2020/21, figures that will need improvement if he is to shine at one of Europe’s elite.

He does, however, have the explosiveness and raw talent to make an impact and has been one of the most watchable talents in Ligue 1 over the past two seasons.

Some of Europe’s biggest clubs considered making a move for Jonathan David last summer, the Canadian prospect having attracted attention following his performances for Gent in Belgium.

The forward scored 30 goals in 60 league appearances before Lille gambled on his services, spending €30m – funds raised from the sale of Victor Osimhen to Napoli – to sign the starlet.

It has proven a shrewd investment with David shining during his first season in France, overcoming a difficult start and much criticism to score 13 league goals and play a major role in Lille’s title success this season.

Liverpool, Manchester United and Arsenal have all been linked with a move for the 21-year-old, who has scored 11 goals in just 12 appearances for Canada at international level.

11 of David’s league goals this season came following the turn of the new year as he found his feet, raising the prospect of the star exploding further next season if Lille can keep him out of the clutches of Europe’s elite.

The post What next for Lille’s title winners? Five players already being eyed by Europe’s elite first appeared on The Football Faithful.