BRITAIN is braced for stormy conditions tomorrow as lashings of rain and heavy winds move in from France.

The Boxing Day weather will come as a washout for many after thousands woke up to a white Christmas today.

Forecasters have warned the conditions could hit the UK tomorrow[/caption]

According to forecaster WXCharts, parts of Scotland were blanketed in up to four inches of snow this morning.

Meanwhile, parts of northern England including the Lake District saw a centimetre or two of the white stuff.

Southern parts of England and Wales, however, were left sodden as hours of rain soaked through their festive plans.

And Tony Zartman, Accuweather meteorologist, said the southern coast of England could be hit by more stormy conditions from tomorrow.

He told Express.co.uk: “A storm will pass by to the south across France on Boxing Day.

“This may bring some rain as far north as the southern coast of England.


How JonBenet Ramsey murder mystery could be ‘solved in HOURS’

SHAKEN TO THE CORE

“But, much of the remainder of England and Wales are expected to be dry at this point.”

Northern Ireland and eastern parts of England will see outbreaks of rain first thing tomorrow while Scotland is set for sleet and snow.

The Met Office has also slapped yellow weather warnings for snow across vast parts of northern England and Scotland with winds of up to 45mph in places.

According to the forecasters, strong gusts on Boxing Day could bring challenging travel conditions across upland areas.

There has also been a warning of blizzard-like conditions above 300-400 metre elevation.

Temperatures are forecast to plunge as low as a freezing -2C in parts of the north and east of England between Christmas Day and December 28.

But weather in the UK will be slightly warmer than average for this time of year with parts of the south enjoying mild temperatures between 7C and 9C.

Frank Saunders, a chief meteorologist, said: “The Christmas period will be unsettled for much of the UK this year.

“Many will see wet and cloudy conditions as mild air dominates the south and west.

“This contrasts with the cold air in the northeast, which brings the chance of some snow, most likely over the Pennines and the southern half of Scotland, and is perhaps a little more likely into the early part of Boxing Day.

“Added to the mix is a strong easterly wind, especially in northern areas, which will make it feel particularly cold.”

Anyone travelling cross-country for festive get-togethers is urged to take extra care on the roads.

Boxing Day will be “bitingly” cold as strong winds set in – despite highs of 6C in Scotland, 7C in Northern Ireland, 9C in Wales and 11C in England.

And weather maps show yet more snow is on the way from December 27, meaning a truly wintry festive period.

Half an inch will fall on Monday, rising to three on December 29 and 2.5 through to New Year’s Eve, according to WXCharts.

It will continue until January 2 when warmer air will turn snowfall into rain. 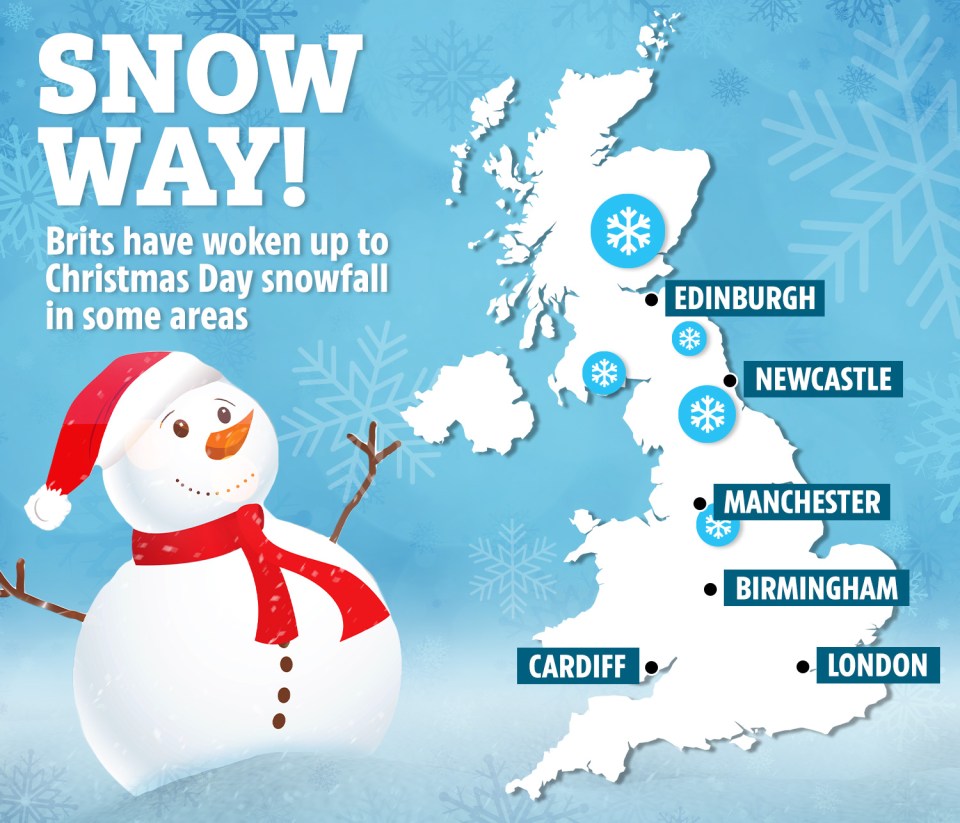