Remembering every one of Manchester United’s European finals

Remembering every one of Manchester United’s European finals 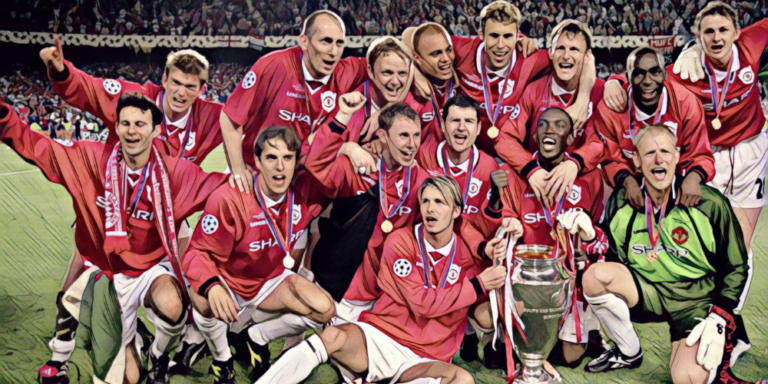 Manchester United face Villarreal in the Europa League final on Wednesday evening, as the Red Devils look to win the competition for a second time and finish the campaign with major silverware.

United have a long and storied history in continental competition and will travel to Gdansk as favourites, against a Villarreal side competing in their first ever major European final under the management of Europa League specialist, Unai Emery.

By contrast, tomorrow’s clash will be the eighth time that the Red Devils have contested a major European final and ahead of the showpiece we’ve decided to look back at each of their previous final appearances.

Manchester United became the first English side to be crowned champions of Europe in 1968, as Matt Busby’s side thrashed Benfica after extra-time to win the European Cup at Wembley.

Just a decade after the Munich Air Disaster, the Red Devils reached the final of Europe’s biggest tournament, eliminating record winners Real Madrid over two legs in the semi-finals.

United faced Benfica in the showpiece in London, with the Portuguese side experienced on this stage as they appeared in a fifth final, having twice won the European Cup in consecutive seasons in the early sixties.

The first half ended goalless before Bobby Charlton opened the scoring with a flicked header for Busby’s side, though Jaime Graca’s equaliser forced the final into extra-time.

George Best – named as European Footballer of the Year in 1968 – restored the Red Devils’ lead with a brilliant individual effort, before Brian Kidd celebrated his 19th birthday in perfect fashion by heading home a third.

Charlton’s second made it 4-1 and completed a superb final performance, as United became England’s first ever winners of the European Cup.

United had to wait over two decades before featuring in their next European final, meeting Barcelona with the Cup Winners’ Cup at stake in 1990/91 – the first season English clubs returned to continental competition after the ban following the Heysel Disaster.

The final saw the two sides meet near the start of what proved unforgettable periods in their respective histories, Sir Alex Ferguson’s side beginning to gain momentum after FA Cup success the previous season, against the early incarnation of Johan Cruyff’s Barcelona ‘Dream Team’.

Former Barcelona forward Mark Hughes proved the hero for United in Rotterdam after scoring twice in the second-half, including a wonderful effort from an acute angle after rounding the goalkeeper.

Ronald Koeman’s late goal proved little more than a consolation for the Catalans, who bounced back to be crowned European Cup winners the following season.

The fitting finale to a season that remains arguably the most historic in English football history, Manchester United became champions of Europe for a second time in the most dramatic of circumstances to seal treble success in 1998/99.

Sir Alex Ferguson’s side travelled to face Bayern Munich at the Camp Nou in search of history, having already secured both the Premier League and FA Cup in the days leading up to the Champions League final.

Their route to the showpiece had been captivating including an incredible comeback against Juventus in the last four, though their final success remains etched into the folklore of club football’s biggest competition.

Bayern were chasing a treble of their own and dominated for much of the final in Catalonia, Mario Basler’s free-kick after just six minutes providing the Germans with a lead they would hold until stoppage-time.

United’s treble-winning side were made of stern stuff, however, and the club’s never-say-die attitude saw the Red Devils improbably snatch victory from the jaws of defeat, stoppage-time goals from Teddy Sheringham and Ole Gunnar Solskjaer sparking pandemonium from the travelling Mancunian support.

The Red Devils had pipped Chelsea to the Premier League title by just two points ahead of the clash at the Luzhniki Stadium in Moscow, and the evenly-matched sides resulted in a tense final in the Russian capital.

Cristiano Ronaldo opened the scoring with his 42nd goal of the campaign in all competitions, meeting Wes Brown’s cross to thump home a header in another moment that strengthened his case for a first ever Ballon d’Or.

Frank Lampard equalised on the stroke of half-time for Chelsea and the sides were unable to be separated in the second half, whilst no winner was found in extra-time despite Didier Drogba’s red card for the Blues.

The resulting shoot-out saw Ronaldo miss his spot-kick to hand John Terry the chance to crown Chelsea champions of Europe, though the centre-back slipped on the rain-soaked pitch to see his effort agonisingly cannon off the post.

United returned to the Champions League final the following season as holders, where they faced a Barcelona side seeking treble success under the guidance of novice coach Pep Guardiola.

No side had ever defended the trophy in the Champions League era and Sir Alex Ferguson’s side failed in their bid as Barcelona secured a 2-0 win at the Stadio Olimpico.

Guardiola was in the midst of an incredible first full season in charge at the Camp Nou and the Spaniards proved too good for the Red Devils in Rome, goals from Samuel Eto’o and Lionel Messi crowning the Catalans champions.

Eto’o prodded home an opener after just 10 minutes to open the scoring, before Messi rose majestically to plant a header beyond Edwin van der Sar and seal the ultimate success for the all-conquering Spaniards.

Two years later and Manchester United resumed rivalries with Barcelona in the Champions League final, though any hopes of exacting revenge on the Spaniards were ended following one of the great final performances from Pep Guardiola’s side.

Sir Alex Ferguson hailed Barcelona following their victory as the best side he had ever faced in his time as Manchester United manager, admitting the Spanish champions were ‘unplayable’ as their midfield contingent of Andres Iniesta, Xavi and Sergio Busquets ran the show in London.

Wayne Rooney’s first-half equaliser proved little more than a false dawn for the Red Devils, who were outclassed by perhaps the greatest side club football has ever witnessed.

United’s clash with Villarreal will be the second time the club has competed for the Europa League title, four years on from their previous triumph in the competition under Jose Mourinho.

Mourinho secured a Europa League and League Cup double during his first season in charge at Old Trafford, guiding the Red Devils to the showpiece of Europe’s secondary competition after beating the likes of Anderlecht and Celta Vigo in the knockout stages.

United faced an emerging Ajax side packed with youthful talent in the Stockholm final, though secured victory in comfortable fashion as goals from summer signings Paul Pogba and Henrikh Mkhitaryan saw the Red Devils win the trophy for the first time.

Read Also – Legends: Six players to win the Golden Boot and finish with the most assists in a PL season

The post Remembering every one of Manchester United’s European finals first appeared on The Football Faithful.