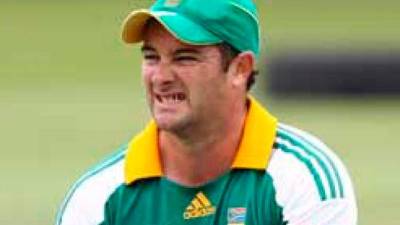 CENTURION: South African coach Mark Boucher (pix) believes his team is capable of defeating Sri Lanka in the two-Test series which starts at SuperSport Park in Centurion on Saturday.

“We’re in a rebuilding phase and we’ve got some youngsters around but we’re playing in conditions that suit us better than the opposition,” said Boucher on Friday.

“If we hit our straps and execute the plans we’ve put in place I think we’ll give ourselves a very good chance to win against them.”

Sri Lanka have won their most recent four Tests against South Africa, including a shock 2-0 series win on their tour two seasons ago.

“I didn’t watch a lot of it,” Boucher said of the 2018/19 series, “but it’s something we can channel to our advantage. We can’t just coast into this as a team.”

South Africa have a strong record at Centurion, which includes wins in all four previous Tests against Sri Lanka at the venue.

Boucher said there were “a couple of niggles” involving fast bowlers Lungi Ngidi and Glenton Stuurman that would delay the final selection of a playing eleven.

Both came through intensive training on Thursday without any apparent problems but Boucher said they would need to be assessed after a night’s rest.

Sri Lanka also have an injury concern, with Suranga Lakmal nursing a hamstring strain. Lakmal was described by coach Mickey Arthur earlier in the week as “the leader of our attack”.

Sri Lankan captain Dimuth Karunaratne told journalists on Thursday that he believed his team could match South Africa in the quality of their pace bowling. “If you look at pace, we’re about equal,” he said.

“I think the batsmen will be the difference. Whoever has the better batting side has a good chance of winning the series.”

Both teams are staying at a country club near Pretoria within easy driving distance of the Test venues in Centurion and Johannesburg.

With a surge in Covid-19 infections in South Africa, both Tests will be played without spectators. – AFP

NAPOLI – A further club after LLORENTE

Covid: £800 house party fines to be introduced in England