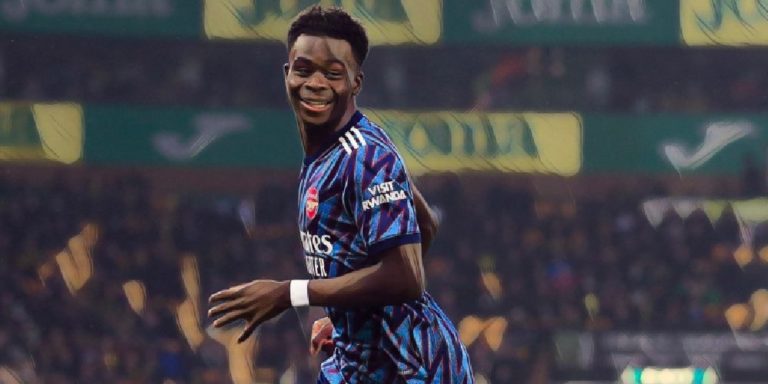 Arsenal earned their fifth straight win in all competitions as they ran out comprehensive 5-0 winners over Norwich City.

Both sides came into the game with massively differing agendas, with Arsenal looking to make a return to the Champions League next season, while Norwich are desperately trying to avoid another relegation back to the Championship.

Arsenal got themselves off to a bright start, and in just the sixth minute, would take the lead following a free-flowing aftack that was duly finished off by Bukayo Saka with Martin Odegaard registering his fifth goal involvement in his last three Premier League outings.

The Gunners would miss some hugely presentable opportunities to double their advantage, though would net a deserved second a minute before the interval, Odegaard playing a decisive pass into Kieran Tierney who burst into the area before firing low in-off-the-post beyond Angus Gunn.

Gabriel Martinelli saw a goal chalked out for offside after half time, though Arsenal would eventually make it three midway through the second half, Saka netting his second of the game as he beat Gunn with a low strike from outside the area when little had seemed on for the England international.

The Gunners would net a fourth with six minutes remaining as Alexandre Lacazette converted from the penalty spot after he had been brought down by Ozan Kabak, before Emile Smith Rowe netted a fifth in the last minute, the substitute tucking home at the back post after Nicolas Pepe’s initial strike had been deflected.

The result solidified Arsenal’s place in the top four at the halfway stage of the season, though some sides, including Tottenham and Manchester United, have three games in hand on the Gunners following their respective Covid outbreaks earlier this month.

Speaking after the game, Arsenal boss Mikel Arteta was delighted with his side’s dominant performance.

“It’s a very satisfying result because in this festive period we have to keep performances to a high level,” he told Match of the Day.

“We looked really sharp and committed. It’s a big win for us. I am really pleased. The amount of chances we create is pleasing.

“We go to every ground to try and impose our game. Today was a really good example. The unity we have around the club and with our fans is very pleasing.”

Pierre-Emerick Aubameyang was once again not selected following his disciplinary indiscretions, and subsequently being stripped of the captaincy, and Arteta was asked about his prolonged exclusion.

“He wasn’t selected for today’s match,” he said. “We’ll take it game by game. That was the decision.”

Arsenal now have a short turnaround before they face Wolves at 12:30 on Tuesday.

“We will try and recover as well as we can and try and win the game,” said the Spaniard.

The post Arteta reacts as Arsenal chalk up comprehensive 5-0 win over Norwich first appeared on The Football Faithful.