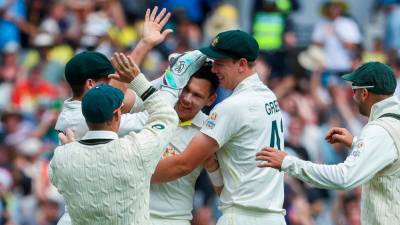 MELBOURNE: England’s hopes of keeping the Ashes alive plunged on Sunday as Australia reduced the tourists to 128 for six at tea on day one of the third test in Melbourne after home captain Pat Cummins won the toss and put his bowlers to work on a grassy wicket.

Having resumed after lunch on shaky ground at 61 for three, England lost captain Joe Root for 50 off the bowling of Mitchell Starc and talisman Ben Stokes for 25 after the all-rounder hit Cameron Green straight to a fielder.

Recalled batsman Jonny Bairstow was 21 not out, left to rescue the innings with the tail on a cloudy afternoon at the Melbourne Cricket Ground.

Holders Australia lead the five-match series 2-0 and can retain the urn with a draw or victory in Melbourne.

Root notched his ninth half-century in Australia but again failed to go on with it, falling to a poor, loose shot at a wider Starc delivery that sent a nick to wicketkeeper Alex Carey.

Stokes was also culpable in his dismissal, trying to lift Green over the in-field but sending his back-foot drive straight to Lyon at backward point.

He joined former Australia opener Bruce Laird in having the most fifties Down Under (9) without scoring a century.

Cummins captured all three wickets in the morning, savouring his return to the team after missing the second test in Adelaide due to a Covid-19 problem.

He removed both England openers cheaply, with Haseeb Hameed caught behind for a duck and Zak Crawley out for 12 with a nick straight to the gully.

Cummins then broke a budding 48-run partnership anchored by Root, with England number three Dawid Malan caught in the slips for 14 in the final over before lunch.

It was an impressive return by Cummins, who was forced to miss the second test in Adelaide after being identified as a close contact of a Covid-19 case.

Cummins replaced Michael Neser in Australia’s XI, while Victoria paceman Boland made his test debut in place of the injured Jhye Richardson.

Only one team has ever turned around a 2-0 deficit to win the Ashes. That was Don Bradman’s Australia who came back to win the 1936/37 series 3-2 on home soil. -Reuters